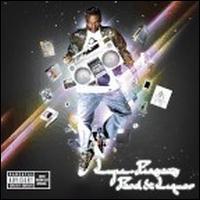 A few years in the making, Lupe Fiasco's Food and Liquor follows a fruitless association with Epic (as a member of da Pak), an aborted solo deal with Arista (which yielded one promo single), a handful of guest appearances (tha Rayne's "Kiss Me," Kanye West's "Touch the Sky"), and a leak of an unfinished version of the album that set the official release back to September 2006. Still only 25 years old, Fiasco -- a Chicagoan of Islamic faith who owns a number of black belts -- sounds wise beyond his age, rarely raises his voice, projects different emotions with slight inflections, and is confident enough to openly admit his inspirations while building on them. It Was Written is his touchstone, and there are traces of numerous MCs in his rhymes, from Intelligent Hoodlum and Ed O.G. to Nas and Jay-Z. Pharrell (aka Skate Board P) might've considered suffocating himself out of envy with his Bathing Ape sweatshirt when he first heard the album's lead single, "Kick, Push," dubbed a skate-rap classic well before Food and Liquor hit shelves. Like nothing else in the mainstream or underground, its subject matter -- skater boy meets skater girl -- and appealing early-'90s throwback production finally broke the doors down for Fiasco's solo career. Wisely enough, Fiasco doesn't turn the skating thing into a gimmick and excels at spinning varying narratives over a mostly strong set of productions from 1st & 15th affiliates Soundtrakk and Prolyfic, as well as the Neptunes, West, Needlz, and Mike Shinoda. There are strings, smeary synthesized textures, and dramatic keyboard vamps galore -- templates that befit heartbreaking tales like "He Say She Say" and casually deep-thinking reflections like "Hurt Me Soul," where the MC confronts some of his conflicting emotions: "I had a ghetto boy boppa/Jay-Z boycott/'Cause he said that he never prayed to God, he prayed to Gotti/I'm thinking golly, God, guard me from the ungodly/But by my 30th watchin' of Streets Is Watching, I was back to givin' props again/And that was botherin'/'Bout as comfortable as a untouchable touching you." Deserving of as much consideration as the other high-profile debuts of the past few years, up to and including The College Dropout, Food and Liquor just might be the steadiest and most compelling rap album of 2006. ~ Andy Kellman, Rovi