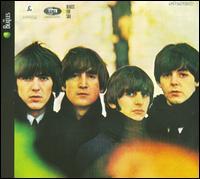 It was inevitable that the constant grind of touring, writing, promoting, and recording would grate on the Beatles, but the weariness of Beatles for Sale comes as something of a shock. Only five months before, the group released the joyous A Hard Day's Night. Now, they sound beaten, worn, and, in Lennon's case, bitter and self-loathing. His opening trilogy ("No Reply," "I'm a Loser," "Baby's in Black") is the darkest sequence on any Beatles record, setting the tone for the album. Moments of joy pop up now and again, mainly in the forms of covers and the dynamic "Eight Days a Week," but the very presence of six covers after the triumphant all-original A Hard Day's Night feels like an admission of defeat or at least a regression. (It doesn't help that Lennon's cover of his beloved obscurity "Mr. Moonlight" winds up as arguably the worst thing the group ever recorded.) Beneath those surface suspicions, however, there are some important changes on Beatles for Sale, most notably Lennon's discovery of Bob Dylan and folk-rock. The opening three songs, along with "I Don't Want to Spoil the Party," are implicitly confessional and all quite bleak, which is a new development. This spirit winds up overshadowing McCartney's cheery "I'll Follow the Sun" or the thundering covers of "Rock & Roll Music," "Honey Don't," and "Kansas City/Hey-Hey-Hey-Hey!," and the weariness creeps up in unexpected places -- "Every Little Thing," "What You're Doing," even George's cover of Carl Perkins' "Everybody's Trying to Be My Baby" -- leaving the impression that Beatlemania may have been fun but now the group is exhausted. That exhaustion results in the group's most uneven album, but its best moments find them moving from Merseybeat to the sophisticated pop/rock they developed in mid-career. ~ Stephen Thomas Erlewine, Rovi