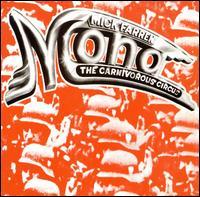 The Mona (The Carnivorous Circus)

Following on from the disheveled collapse of the Deviants, the wired delinquent garage fuzz monster which propelled him to counterculture superstardom, Mick Farren convened a more-or-less all-star band from the same disreputable circles he'd always moved in. Carnivorous Circus was cut, the first essential album of the 1970s, and its still one of the most unrepentantly nasty, gratuitously ugly records ever made. Rock history loves to bandy those terms around, then apply them to this week's most fashionable long-haired gnarly snarlies. And it's true, the Pretty Things, the MC5, the Pink Fairies, the Broughtons, any of the myriad '60s freakbeat bands captured on sundry Nuggets and Pebbles type collections, they've all dipped a toe into those malevolently murky waters. Some of them have even swum around a little. Carnivorous Circus goes the whole hog and then some, holding its breath and descending to the seabed. Now it owns a roadhouse and wrestles giant squid for fun. The brief opening blur of Bo Diddley's "Mona" captures the amphetamine frenzy which is the circus' guiding fire -- half an hour later, the same juggernaut resurfaces for a seven minute nightmare sodden in churning riffs, agonized fiddle, and death abyss vocals so absurdly, irresistibly hypnotic that, by the time it ends, life itself suddenly seems a little emptier. A lot safer, but a little emptier. The heart of the album, of course, is the title track, a two part (28-minute) patchwork of clowns, jugglers, acrobats, and lion tamers, bellicose verse, fragmentary melody, isolated riffs, and brutal conversation. Simultaneously relentlessly self-indulgent and ruthlessly riveting, few of the performances are long enough to make more than a passing impression. All, however, ensure that the impression itself is a brick-shaped contusion, while a moment of relative sanity amidships, a saber-toothed take on "Summertime Blues," only offers relief by virtue of its familiarity. Otherwise it's battering business as usual. Carnivorous Circus is not an album for the faint of heart; it should not be played if you can't run away, and certainly shouldn't be filed alongside all those other little ditties you have tucked away on the garageland shelf. Not because it'll beat them all up -- that, after all, goes without saying -- but because none of them will ever sound the same again. Threats are only meaningful if you think they might be carried out. Carnivorous Circus doesn't even leave time for you to think. ~ Dave Thompson, Rovi