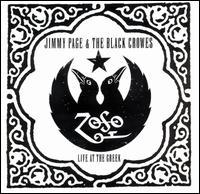 Live at the Greek

The Black Crowes were dogged with comparisons to the Rolling Stones and the Faces throughout the first decade of their career, so it came as a mild surprise that they teamed with Led Zeppelin guitarist Jimmy Page in late 1999 for a couple of concerts. Zeppelin had a mystique and majesty about them that the Crowes never attempted to emulate. They were an earthy, bluesy rock band and while they found a number of different ways to rework their influences, they never tried the stately grandeur that was Zeppelin's second nature. So, some observers were curious to see how these two approaches worked. Well, it worked very, very well indeed. It shouldn't have come as a surprise that it was a good, comfortable fit since Page always demonstrated a true love of blues and early rock & roll, even on Led Zep's heaviest moments. What may be a surprise, at least to listeners that always dismissed the Black Crowes as revivalist hacks, is how supple and muscular the band sounds on Live at the Greek and how powerful vocalist Chris Robinson is. The double-disc album, released originally only through the internet but then through retail on TVT, essentially replicates an entire concert from Page and the Crowes, one of the first before they set out on a full-length American tour in the summer of 2000. They stick to Led Zeppelin classics and old blues and R&B standards like "Woke up This Morning," "Sloppy Drunk," "Mellow Down Easy," and "Shake Your Money Maker," plus the Yardbirds' "Shape of Things to Come" and Fleetwood Mac's "Oh Well." No Crowes songs are here due to contractual reasons - the band left American/Columbia in 1999, and they were not allowed to recut any song they released on the label in the years immediately following their departure; but in a way, that only strengthens the album. By pounding out hard-driving blues-rock and classic Zeppelin tunes, the band is able to stretch out and reveal just what a capable, versatile band they are. The true sign of their abilities is that Page sounds looser and happier here than he has in years; he sounds like he's truly enjoying himself, a quality that is debatable on the Page & Plant records, no matter what their virtues are. Live at the Greek isn't a landmark release, and only hardcore Page, Black Crowes, and Zeppelin fans are likely to want this, no matter how vibrant and lucent these faithful interpretations are. But for those fans, they'll be quite pleased with how good, how strong Live at the Greek is. ~ Stephen Thomas Erlewine, Rovi