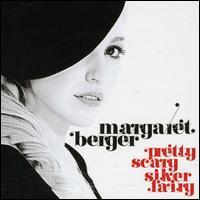 The second album by one-time Norwegian Idol finalist Margaret Berger (the follow-up to her rockier pop debut, Chameleon -- a Top Five album in Norway) is a full-fledged triumph of 21st century electronic pop, every bit the equal of more heralded recent releases by her countrywoman Annie and their Swedish compatriot Robyn. Pretty Scary Silver Fairy bears a strong similarity to Annie's Anniemal, in particular -- especially at first, with coy spoken bits on the slight intro/statement-of-purpose track "Silver Fairy," echoing Anniemal's intro, and "Seek I'll Hide," a bouncy synth pop tune that, like Annie's "Chewing Gum," employs a playground metaphor to comment on more adult emotional entanglements. This juxtaposition of mature and childlike sensibilities forms a central motif throughout the record. Berger (or "Marble," as she introduces herself to us) reportedly wished her album to be "sweet but mean at the same time" -- hence the "pretty" and "scary" of the title -- a description that resonates with the balance she strikes between tones of innocence and experience. As befits a set of songs written by a 21-year-old reflecting back on her teenage years, these tunes convey a sense of carefree, youthful hope and boundless optimism that's often tempered (though never too harshly) by a more complex, knowing nostalgia. Musically as well as lyrically, this is reflected in the range between "Naive (16)," a breezy, swinging, wistful number reminiscent of a less bratty Lily Allen (it's easily the least electronic cut on the album -- there's even an accordion -- although it does veer into a sudden techno breakdown), and the clubby electro workout "Get Physical," a markedly more mature track (in both senses) that's a call to self-empowerment through sexual exploration. The album first hits its stride with a pair of disco-fueled singles: "Will You Remember Me Tomorrow?" is a sunburst of melody and synthetic groove, whose wide-eyed tale of glorious and unexpected new love is undercut with the plaintive uncertainty of the rather melodramatic doubt expressed in its title. "Samantha" might be even better; a pulsating neon disco stomper whose lyrical pep talk to a brokenhearted girlfriend -- "lift your head up high, girl/you need to be yourself" -- is as anthemic as they come. And then there's "Robot Song," arguably the album's centerpiece, wherein the seemingly comic sci-fi scenario of a forbidden human-robot love affair takes on an unexpected poignancy -- not unlike Robyn's "Robotboy," but even more so -- as Berger, singing in character as both robot and lover, declares "you're the only one who makes me feel a thing." Interestingly, the song's impassioned chorus -- "I'm in love with a robot" -- which grows more affecting as we warm to the emotional reality of the situation, is one of the few moments on the album where "Marble" hints at the full strength and power of her voice. Recordings from her Idol stint, as well as many tracks from her debut, reveal her to be a remarkably soulful, full-throated singer, but for the bulk of Fairy she modulates her voice into a more modest instrument. Not that it sounds thin or lacking in personality: although it would have been interesting to hear a song like "Get Physical," for instance, with a more commanding, emotive delivery, a simpler and sweeter approach is probably more germane to this mode of somewhat icy electro-pop; it also accentuates the mood of playful innocence. That Berger evidently chose to downplay her vocal abilities for the sake of constructing a sonically and thematically unified album is in itself a strong indication of her refined sense of pop craftsmanship. And this is, without a doubt, an absolutely top-notch collection of danceable, melodic synth pop and electronic disco that stands -- alongside Kylie Minogue's Fever, Rachel Stevens' Come and Get It, Paris Hilton's Paris, and their aforementioned Scandinavian counterparts -- as one of the finest pieces of popcraft to come out of the early 2000s -- as well as an intriguingly personal artistic statement. Seek it out! ~ K. Ross Hoffman, Rovi