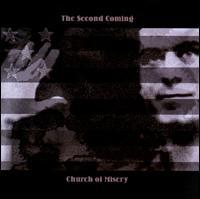 Church of Misery's twisted enthrallment with serial killers has always been a tad bit creepy (errrr, quite!), but on the Japanese band's sophomore album, 2004's The Second Coming, that fascination finally manifested itself with enough righteous fury to reassure listeners that these guys were actually on our side -- not the killers'. Just about, anyway. Anyhow, there's absolutely nothing tentative about The Second Coming, which funnels the group's signature, psych-infused stoner doom through a wall of overdriven amplifiers, yielding molten magma guitars, earth-vibrating bass, thunderclap drums, and arguably the most aggressive vocal performance of frontman Yoshiaki Negishi's career. Wild-eyed, raging, slobbering opener "I, Motherfucker (Ted Bundy)" (yes, every song is still subtitled with the name of the serial killer who inspired it) comes off like Acrimony and Electric Wizard beating each other bloody with the Stonehenge monoliths, and even its polar opposite in terms of tempo, the doom groove holocaust of "Red Ripper Blues (Andrei Chikatilo)," knows absolutely nothing about subtlety. On top of that, there are of course the consistently disturbing lyrics, perhaps culminating in the tale of Aileen Wuornos, "Filth Bitch Boogie," where disturbing dialog from her sentencing hearing is used as corroborating evidence for the song's MC5-on-meth rhythm & blues. The feedback-laden (almost) instrumental "El Topo" finally steps back from this murderers' row, and the band's high-energy covers of Cactus' "One Way or Another" and May Blitz's "For Madmen Only" (available on the 2012 Rise Above reissue) sound a little safer, though hardly altogether tame, by comparison. Such is the M.O. for Church of Misery: their morbid curiosities about the darkest corners of humanity's soul ultimately serve to expunge listeners of their own guilty fascination through sheer musical horror, and for that we should probably thank them. ~ Eduardo Rivadavia, Rovi