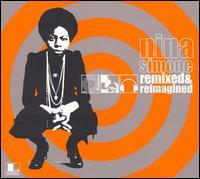 Nina Simone's sole U.S. pop hit, "I Loves You, Porgy," was released in 1959; too black for American white audiences, she found more favor abroad. In Britain, for example, she placed five singles in the charts and had six hits; "I Put a Spell on You" charted twice. Back in the States in more recent times, the electro scene began delving ever deeper into funk and soul, and with that Simone's fabulous music finally began finding appreciation with a whole new generation of fans. To that end, RCA is remastering and re-releasing her back catalog, originally issued on the label between 1967 and 1974. To further fire up interest, the label has let a slew of DJs and producers loose on the late star's songs, resulting in Remixed & Reimagined, Simone for the dance-crazed generation. Groovefinder's "Ain't Go No/I Got Life" is the obvious point of entry, a sensational Stax-flavored remix that's already a U.K. hit. Daniel Y.'s remix boasts just a touch of Stax as well, but aimed at a far more sophisticated palette. In contrast, Jazzeem turns up the funk while creating a decidedly exotic flavor to his remix, while Tony Humphries takes funk straight into house. Madison Park and Lenny B. opt for brightness and lightness, house at its most effervescent; François K paints his house in pastels, creating a gently coursing, almost trance remix; and Mowo works in a darker mode that pushes his house styling into the vast aural atmospheres of dub. Chris Coco builds his house old-school style, with a four-on-the-floor beat and a cathedral organ that takes Simone herself straight back to church. Once there, she and DJ Logic confront the "Obeah Woman," with a remix that eloquently emphasizes the singer's gospel influences. Nickodemus floats his remix heavenward on swaths of instrumental strings and a rippling harp, exquisitely enhancing the lyrics and Simone's hope for the future. In contrast, Organica's remix swirls with dark, ominous clouds, sending Simone sailing across a psychedelic-laced "Westwind." But, unsurprisingly, it's Coldcut who offer the most adventurous track, taking their scissors to "Save Me" and creating a pulsing, effects-drenched classic. Then again, every remix here is inspired, re-creating Simone's music in ways that could barely be envisioned. The set's Reimagined title couldn't be more accurate, and this tribute to the late great singer could hardly be better. ~ Jo-Ann Greene, Rovi