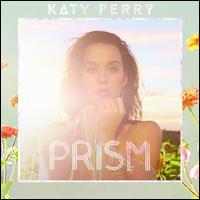 Teenage Dream did its job. With its five number one singles, the 2010 album turned Katy Perry into a genuine superstar, the kind of musician whose image rivaled her music in popularity, the kind who could topline her own 3-D theatrical documentary, the kind whose name became shorthand for a sugar-pop sensibility. This meant there was only one thing left for her to do on its 2013 sequel, Prism: to make a graceful pivot from teen dream to serious, mature artist. Prism hits these marks precisely yet isn't stuffy, not with its feints at trap-rap, but even with the preponderance of nightclub glitz, there isn't a shadow of a doubt that Katy Perry has toned down her cheesecake burlesque, opting for a hazy, dreamy, sun-kissed hippie Californian ideal that quietly replaces the happily vulgar pinup of her earliest years. All the lingering nastiness of One of the Boys -- the smiling Mean Girl backstabbing of "Ur So Gay," for instance -- and the pneumatic Playboy fantasy of Teenage Dream are unceremoniously abandoned in favor of Perry's candy construct of a chipper, cheerful grown-up prom princess, the popular girl who has left all her sneering dismissals in the past. Perry remains a terminal flirt but she channels her energies into long-term relationships -- the sexiest song, "Birthday," is a glorious retro-disco explosion delivered to a steady boyfriend, while elsewhere she testifies toward unconditional love -- and the overall effect transforms Prism into a relatively measured, savvy adult contemporary album, one that's aware of the latest fashions but is designed to fit into Katy's retirement plan. Ultimately, this makes Prism a tighter, cleaner record than its predecessors -- there are no extremes here, nothing that pushes the boundaries of either good taste or tackiness; even when she cheers on excess on "This Is How We Do" she's not a participant but rather a ringmaster, encouraging her fans to spend money they don't have just so they can have a good time. Ultimately, this sense of reserve reveals just how canny Katy Perry really is: she's determined to give her career a dramatic narrative arc, eager to leave behind the bawdy recklessness of her early years in favor of something that's age appropriate. That's why the lead single from Prism was "Roar," an homage to Sara Bareilles so transparent that the singer/songwriter may deserve co-credit: the inspirational adult contemporary single signaled how Perry no longer views herself as a fluffy confection but rather a showbiz staple who'll be here for years and years, and Prism fully lives up to that carefully constructed ideal. [A Deluxe Edition added three bonus tracks.] ~ Stephen Thomas Erlewine, Rovi