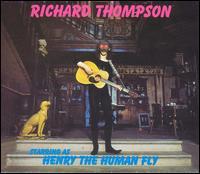 Fans and critics alike seemed to have a difficult time getting a handle on Thompson's new direction, which, for the most part, eschews the electric guitar that had been an integral part of the British folk-rock he had helped forge with his former band Fairport Convention. With the exception of a couple of short instrumental breaks and various electric shadings, Thompson's Stratocaster defers to accordions, fiddles, whistles, dulcimers, harps, and his own acoustic guitar. The songs, which are more idiosyncratic than his Fairport output, are the primary focus. Cuts such as "The Poor Ditching Boy," "The New St. George," and "The Old Changing Way" have the timelessness of the best traditional material Fairport had been mining in the past, while "Roll Over Vaughn Williams," with its swirling electric guitar, and the accordion and electric guitar interplay of the folk-rocker "The Angels Took My Racehorse Away" are prime examples of Thompson's vision of fusing the old and the new. At the time of its release, Henry the Human Fly, with its fresh, yet eccentric take on folk and rock, along with tales of "poor ditching boys," racehorses, tinkers, "painted ladies," and weddings where "nobody's wed" was not a fashionable record, but like the bulk of Richard Thompson's work, it transcends times and trends. Linda Peters (Thompson), Sandy Denny, Ashley Hutchings, and John Kirkpatrick guest. ~ Brett Hartenbach, Rovi