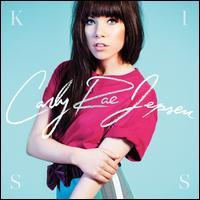 Carly Rae Jepsen wasn't especially well known outside of Canada (where she was a Top Three finalist in 2007's Canadian Idol ) before she shot to stardom on the strength of "Call Me Maybe," one of 2012's definitive songs. The song's sugar-rush immediacy would have made it a huge hit at any time, but it seemed especially sweet as it topped the charts immediately following the gloomy reign of Gotye's angst-ridden breakup lament "Somebody That I Used to Know" during the early part of that year. Where Gotye's hit was all about regret, recriminations, and goodbyes, "Call Me Maybe" was an engaging hello to all the possibilities of a crush so strong it makes you do impetuous things, rising to the top of the charts just in time for summer (in North America, anyway). And while the song had had an undeniable, disco-tinged beat and glossy production, it also harked back to the unabashedly girlish, singer/songwriter pop of early-2000s faves such as Michelle Branch and Vanessa Carlton, right down to the zippy strings that punctuate the hopeful question of the song's chorus. All of this made "Call Me Maybe" very different than the Ibiza-lite dance-pop that seemed to be the template for Top 40 hits in the 2010s (it's also interesting to note that Jepsen was in her mid-twenties when the single hit it big, making her a bit older than expected for the singer of such a seemingly innocent song, but then the wallop of new love is an all-ages feeling). If Kiss, an album whose title captures Jepsen's sweet but not overtly sexy appeal perfectly, only had "Call Me Maybe" going for it, it would still be one of 2012's most notable pop albums. A safer set of songs would have surrounded that single with ten or eleven clones of it, but Jepsen shows she can do other styles nearly as well, spanning the fizzy dancefloor fodder "Tonight I'm Getting Over You" to the catchy oddity "Tiny Little Bows," where Jepsen's voice sounds slightly sped-up and she addresses cities like old flames, to "This Kiss," which sounds the most like a typical pop single, but boasts lyrics (where Jepsen's boyfriend and the object of her affection's girlfriend are "details we both forgot to mention") that are better written than the work of most of her competition. Kiss also includes a couple of duets with established male artists, including "Beautiful" with Justin Bieber (who was instrumental in helping Jepsen cross over to a world-wide audience) and "Good Time" with Owl City, but Jepsen is best on her own, making the most of the savvy songwriting that runs throughout Kiss and shines especially brightly on tracks like "Guitar String/Wedding Ring." After a string of fantastical glamazon pop stars like Rihanna, Lady Gaga, and Nicki Minaj, there's something to be said for Jepsen's girl-next-door persona, which helps make Kiss one of 2012's best, and sweetest, pop albums. ~ Heather Phares, Rovi