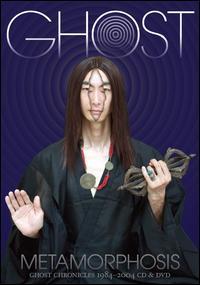 From album to album, starting in the early '90s, Ghost showed a pretty amazing musical progression. But Ghost's origins go back to 1984, so their recordings only tell part of the story, with their beginnings somewhat shrouded in mystery. Metamorphosis: Ghost Chronicles 1984-2004 is a fantastic package for fans as it contains a CD of previously unreleased material all from the late '80s (with a couple outtakes from the first album being the most recent) and a DVD with footage covering the entire time span, showing their incredible growth as a band as well as providing those who missed out on Ghost's infrequent tours with a glimpse of what they're like live. The CD is interesting, highlighting the improvisational nature of the band at that early stage. Aside from their reading of the traditional "Blood Red River," all these tracks are improvisations and emphasize the nearly tribal, communal beginnings of the band. Many feature only drums, percussion, recorder, and voice as opposed to more traditional rock band instrumentation. Taishi Takizawa has some excellent moments on flute and sax, and the 35-plus-minute album centerpiece, "Children of the Sun," is an amazing journey with some great piano from Kazuo Ogino and some electric freak-out guitar courtesy of Masaki Batoh. The last two tracks are the album outtakes: the aforementioned "Blood Red River" and "Cow's Green Cosmic," a short piece that has Batoh improvising some banjo over the sounds of two young sisters playing.

The DVD is the truly exciting part of the package. The opening footage is not of Ghost, but of Batoh protesting the occupation of Tibet at the Chinese Embassy in Tokyo in 1984. After that, you get footage of Ghost performing in a variety of settings through time, in many different incarnations (Batoh claims over 100 people have been members of Ghost over the years). Much like the CD, the sequencing is not quite chronological, but serves to illustrate the progression of the band, from free-form improvisers to a more song-oriented, rock approach (though they never leave improvisation behind them completely). Some of the clips are quite brief ("Zama"), and others are a bit on the dark side (the well-titled "Marvelous Screamer"), but the vast majority of the footage is very good to excellent. Even the footage from temple performances, some lit only by candlelight, is surprisingly good. It's interesting to note how the venue effects the performance, with the club shows demonstrating much more of a rock edge while the temple performances, not surprisingly, have a more contemplative, spiritual feel. There is also some nice visual accompaniment to a couple of the performances: an old-school oil emulsion projection inside the Waseda Salvation Church (!), and the full-on rock extravaganza lighting/visuals of the 2004 Star Pine's Cafe footage. The 2004 footage is without doubt the high point of the DVD, as it has more performances than from any other venue; both the visuals and recordings are excellent, arguably the best of the bunch, and the band is on fire. It's also the majority of the footage with guitar genius Michio Kurihara, and Ghost's rhythm section at the turn of the century (Junzo Tateiwa, drums and percussion, and Takuyuki Moriya, bass) is fantastic. While the rest does vary in quality, there is nothing that's harsh or difficult to watch or listen to because of poor fidelity. Additionally, both the CD tracks and the various filmed performances are given written descriptions in the booklet by Batoh, who displays a rather dry sense of humor that doesn't really come through on their albums. While Metamorphosis: Ghost Chronicles 1984-2004 is an effective career overview, it isn't really designed to be a greatest-hits package or serve as an introduction to the band; consider it an important supplement to their proper albums. This is a release for Ghost fans who want more, whether they're interested in the early history of the band or just wonder what Ghost sounded like live at any given point in their career. Metamorphosis is not only a great addition to the Ghost catalog, it's the perfect description for their odyssey as a band. ~ Sean Westergaard, Rovi