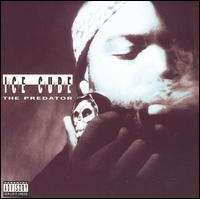 Released in the aftermath of the 1991 L.A. riots, The Predator radiates tension. Ice Cube infuses nearly every song, and certainly every interlude, with the hostile mood of the era. Even the album's most laid-back moment, "It Was a Good Day," emits a quiet sense of violent anxiety. Granted, Ice Cube's previous albums had been far from gentle, but they were filled with a different kind of rage. On both AmeriKKKa's Most Wanted (1990) and Death Certificate (1991), he took aim at society in general: women, whites, Koreans, even his former group members in N.W.A. Here, Ice Cube is more focused. He found a relevant episode to magnify with the riots, and he doesn't hold back, beginning with the absolutely crushing "When Will They Shoot?" The song's wall of stomping sound sets the dire tone of The Predator and is immediately followed by "I'm Scared," one of the many disturbing interludes comprised of news commentary related to the riots. It's only during the aforementioned "It Was a Good Day" that Ice Cube somewhat alleviates this album's smothering tension. It's a truly beautiful moment, a career highlight for sure. However, the next song, "We Had to Tear This Mothafucka Up," eclipses the relief with yet more calamity. By the time you get to the album-concluding "Say Hi to the Bad Guy" and its mockery of policeman, hopelessness prevails. The Predator is a grim album, for sure, more so than anything Ice Cube would ever again record. In fact, the darkness is so pervasive that the wit of previous albums is absolutely gone. Besides the halfhearted wit of "Gangsta's Fairytale, Pt. 2," you won't find any humor here, just tension. Given this, it's not one of Ice Cube's more accessible albums despite boasting a few of his biggest hits. It is his most serious album, though, as well as his last important album of the '90s. ~ Jason Birchmeier, Rovi