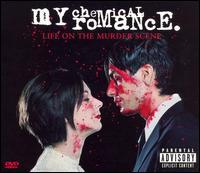 Life on the Murder Scene

Life on the Murder Scene combines two classic ways for a band to bide time in one convenient package: it's a live album and a live DVD. Actually, it's even a little bit more than that, since the live DVD also contains two TV appearances, a selection of performances originally aired online, the videos from My Chemical Romance's 2004 major-label debut, Three Cheers for Sweet Revenge, and three "Making the Video" segments -- and there's a second DVD, containing a "Video Diary," where the bandmembers spend two hours talking and talking: talking about their influences, talking about why they make music (basically, to save lives, whether it's theirs or their fans), talking about each other, talking about how they met, talking about comic book art, talking about 9/11, talking about signing to a major label, talking about touring, talking about "becoming more theatrical," talking about how they're "anti-rock & roll," talking about how "there's no groupies, that's the best part of My Chemical Romance fans." Basically, talking about anything that's happened to the band, which makes this less of a day-by-day video diary and more of an insanely detailed two-hour documentary about a band that is on the cusp of breaking big. In other words, not the thing to convert the skeptics who were not convinced that MCR is a generation-defining band based on "I'm Not Okay (I Promise)" and "Helena," but it's a gift designed for those 25-and-unders whose lives were saved by Three Cheers. It's stuffed to the gills with live performances and ephemera, the kind that wears its repetition proudly (no less than seven different appearances of "I'm Not Okay [I Promise]," for instance), and it takes the hearty soul of a fanatic to sort through it all. For all others, Life on the Murder Scene is a test of patience -- the CD less so, since the live renditions are enhanced by rhythms that are tougher on-stage than they are on record (which tends to ground Gerard Way's hammy vocals), and there's also less of it, so it's easier to digest. But only the dedicated could sort through the four hours of video here, plus the hour of music. They'll do so happily, and be pleased that they can get all this stuff in one convenient package, but Life on the Murder Scene is such a piece of product for a particular moment -- a moment when MCR had been voted Band of the Year for Spin, but have yet to cross over into the mass popular consciousness; a moment when the band needs new material to keep its momentum going, yet has nothing ready; most importantly, a moment when their adolescent angst resonates with a particular generation that is slowly, inevitably reaching a point where the angst no longer makes sense -- that will always exist as a snapshot of this point in time and never be much more than that. ~ Stephen Thomas Erlewine, Rovi