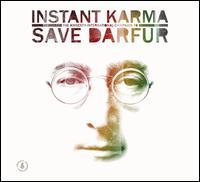 Instant Karma: The Amnesty International Campaign to Save Darfur

Let's get the basics out of the way first: Instant Karma: The Amnesty International Campaign to Save Darfur is a charity album for a great cause, a benefit for Amnesty International's campaign to aid the crisis in the Sudan, an unimpeachable nonpartisan cause if there ever was one. For this campaign, Yoko Ono donated the publishing to John Lennon's solo songs covered for this charity album, effectively turning Instant Karma into a Lennon tribute album. Great cause -- donate by buying this album or donate directly. Great album? Sadly, no. As charity/tribute albums go, Instant Karma is exceptionally weak, containing a load of misguided dross and only being memorable for its missteps, not successes, of which there are none. At best, there are songs that are pretty good, including an appropriately sensitive "Oh My Love" from Jackson Browne, a tumultuous "Working Class Hero" from Green Day, Dhani Harrison and Jakob Dylan do a sincere "Gimme Some Truth," Snow Patrol spaces out "Isolation," and the Postal Service give "Grow Old with Me" a synth makeover without sounding too chilly, while R.E.M.'s re-teaming with Bill Berry on "#9 Dream" is good enough to wish for a full-fledged reunion. Yet all of these songs aren't much more than good, and they're by far overshadowed by choices so bewildering it almost makes Black Eyed Peas' "Power to the People" seem reasonable. There's Steven Tyler doing a shuck and jive on "Give Peace a Chance," there's Lenny Kravitz funkifying "Cold Turkey" as if it were an outtake from There's a Riot Goin' On, and there's an inexcusably lazy U2 rolling the riff on the title song as if it were the Small Faces' "Itchycoo Park" while Bono tosses off his vocal as if he couldn't be bothered to be in the studio. "Imagine" is botched twice: once by Jack Johnson, who turns it into a solipsistic acoustic tune, and once by Avril Lavigne, who blithely ignores the lyric. Christina Aguilera turns the primal scream anguish at the end of "Mother" into a succession of glory notes, while Big & Rich choose to play "Nobody Told Me" -- the only flat-out fun song here (with the exception of "Whatever Gets You Through the Night," given an alright mellow funk treatment by Los Lonely Boys) -- as a stiff, bland boogie devoid of humor. Other songs aren't as memorable -- some pleasantly fade away, some make no impression, some aren't good but not egregiously bad -- but the cumulative effect is decidedly underwhelming. Like most tribute/charity albums, it will not be remembered long after its release -- arguably, it will be forgotten faster than most -- but don't let that stop you from buying the record, since it is really and truly for a good cause -- a cause that deserved a better album than this, but don't let that stop you from supporting Darfur relief. ~ Stephen Thomas Erlewine, Rovi