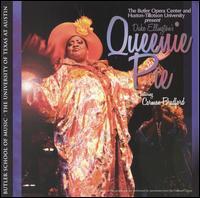 When Duke Ellington initially announced his Black, Brown and Beige in 1938, he rather unambiguously stated that it was going to be an opera. However, when the work was finally heard at Carnegie Hall in January 1943 it had metamorphosed into "a tone parallel to the history of the Negro in America," a purely instrumental work. This turned out to be only the first salvo in a long string of ambitious works; Queenie Pie is about the last, a collaboration with librettist Betty McGettigan that occupied the Duke from 1967 to his death in 1974; and it is, at last, an opera. Based loosely on the character of Madame C.J. Walker, Queenie Pie is a champion beautician whose reign is threatened by a young upstart, Café Olay, who gets involved in a torrid affair with the main contest judge, Holt Faye. It becomes considerably less of a contest when Olay kills Faye, and Queenie Pie decamps to a mysterious island to retrieve a magic formula for "everlasting anythingness." The fact that the work lay unfinished at the Duke's death killed a deal with Public Television, which would have facilitated its premiere, and McGettigan has since served as Queenie Pie's principal advocate, aiding productions in Philadelphia and Washington, D.C., in 1986, Brooklyn in 1993, and the Oakland Opera in 2008. This 2009 production of Queenie Pie, recorded on the Longhorn Music label, was given by the Butler Opera Center at the Butler School of Music at the University of Texas at Austin under the direction of Robert de Simone, starring Carmen Bradford in the title role.

Bradford, a former singer for the Count Basie Orchestra and collaborator with George Benson, is definitely one of the best things about the Longhorn Music album; she throws herself into the role with abandon and exudes charm and confidence. John Mills, who made the orchestrations that borrow to some extent from the Oakland production, does come up with a score that sounds Ellingtonian in a general way, though it does not focus on strong instrumental voices in the manner of Ellington's own band; instrumental solos that are present are not well mixed in the recording and they do not stand out. The chorus is the weakest element in Queenie Pie; they are not particularly well drilled and were dubbed in after the fact, something quite obvious to the ear. Even if this were a seamless recording and an absolutely true representation of Ellington's intentions -- which McGettigan asserts it is, in the latter case -- then Queenie Pie wouldn't have been as successful a show as was Sophisticated Ladies, a musical based on Ellington's work cobbled together by others. The plot is interesting but doesn't reach a meaningful conclusion, and one wonders what changes might have gone into Queenie Pie had the Duke lived long enough to get it past the lyrics and lead sheet stage. Nevertheless, the Longhorn Music Queenie Pie does close a major recording gap in the output of the Duke, and while it pales in comparison to Ellington's other "last work," The Afro-Eurasian Eclipse, it fits into his late output and easily merits recording.~James Manheim, Rovi