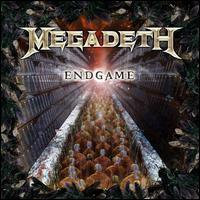 The release of 2009's Endgame brings with it a startling realization: if first-generation thrash metal fans had been polled about which of the genre's "Big Four" -- Metallica, Slayer, Anthrax, and Megadeth -- would prove to be the most resilient and consistently prolific over the next quarter century, the only sure-fire consensus would probably have been "well, anyone but Megadeth!" And yet, 12 studio albums and 150-plus songs later -- more than any of the other three have managed -- that's exactly what's come to pass. It hasn't been easy, and it's rarely been pretty along the way, but despite a few weak efforts, mostly self-inflicted controversy, and no end to verbal diarrhea, none of those other platinum-busting thrash titans have been as productive as Dave Mustaine's bunch -- all of which stands as a testament to the man's stubborn drive to prolong Megadeth's career against all odds, including drug abuse, his unfulfilled vengeance against Metallica, and even a religious reawakening! Of course, one shouldn't overlook the fact that Megadeth have always been a band in name only, thus allowing their leader to cope with voices of dissent by simply showing them the door. The "group" was also broken up for a short spell in the early 2000s while Mustaine recovered from nerve damage to his hands, after which he struggled with inspiration, creative direction, and a never-ending parade of henchmen before finally recovering much of that old Megadeth "mojo" (sonically, lyrically, and even where the cover art was concerned) on 2007's effective return to form, United Abominations. Best of all, this momentum carries on into Mustaine and company's second release for Roadrunner, Endgame, whose title apparently refers to "coming full circle" rather than any sort of goodbye, and finds the latest iteration of Megadeth -- debuting new guitarist Chris Broderick(ex-Nevermore, Jag Panzer) -- working primarily within their technical thrash comfort zone (think Peace Sells through Rust in Peace), with only a few latter-day elements and rare experimental diversions.

As such, deceptively simple guitar-shredding master classes like "This Day We Fight!," "1,320" (surprisingly, written about "funny car" racing), and first single "Headcrusher" are cut from the same bloody cloth as "Wake Up Dead" and "Set the World Afire," while politicized rants such as "44 Minutes," "Bite the Hand That Feeds," and the title cut recall old stalwarts like "Peace Sells" and "Holy Wars." And for those who enjoyed Megadeth's early-'90s shift away from incessant thrashing toward the more "civilized" (but pre-sellout) Countdown to Extinction and Youthanasia albums, there are more methodical and melodically sweetened cuts like "Bodies Left Behind," "How the Story Ends," and "The Right to Go Insane." Indeed, the only song here that breaks entirely from vintage Megadeth templates is the elaborately named "The Hardest Part of Letting Go...Sealed with a Kiss," which surely owes its orchestrated string backdrops to the European metal perspective afforded by producer Andy Sneap, and tells a "love story" about entombing one's beloved behind a brick wall à la Edgar Allan Poe's The Cask of Amontillado. This one anomaly notwithstanding, however, Endgame is arguably the least commercially concerned Megadeth album since Rust in Peace some 20 years earlier, and by touching on so many of the favored songwriting styles of those early years, it should not only give their typically opinionated fan base very little to kvetch and moan about, but also throw new fuel upon the flames of Megadeth's unlikely longevity. ~ Eduardo Rivadavia, Rovi