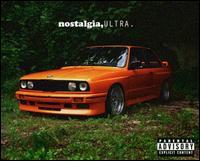 Frank Ocean co-wrote songs for John Legend ("Quickly") and Brandy ("1st & Love"), signed to Def Jam, and connected with rap group Odd Future, but his career as a solo artist did not gain traction until he linked to an upload of this, his first mixtape, on his Tumblr blog in early 2011. Compared to most releases of its kind, Nostalgia, Ultra is plotted with care, not slapped together with haste. It shifts between original material -- produced by Christopher "Tricky" Stewart, MIDI Mafia, Happy Perez, and James Fauntleroy II -- and anti-pigeonhole re-voicings of songs by Coldplay, Mr. Hudson, Eagles, and MGMT. Ocean also weaves clever threads, like mentioning Stanley Kubrick one moment and sampling dialogue from the director's Eyes Wide Shut during another. Ocean's uniqueness doesn't lie in the productions he uses -- they're neither exceptional nor particularly left of center here -- or his range of inspirations and references. It's all in his wistful, often self-effacing perspective and numbed, restrained delivery, heard at full power in "Songs for Women," where he tries to arrange an after-school rendezvous in his dad's empty house and brags about "harmonizing to Otis, Isley, Marvin" but eventually laments that his woman doesn't listen to him or his music: "It's like she never heard of me." Much of the material indeed carries a longing for the past -- strange since Ocean is still in his early twenties. When he's not looking back, he's still living in his head. "Swim Good," a grim escape fantasy, has the singer driving his car to the shore, his trunk “bleeding” with “broken hearts”: “I woulda put tints on my windows, but what’s the difference?/I feel like a ghost, no Swayze, ever since I lost my baby." "Nature Feels" is a Garden of Eden fantasy over the swirling neo-disco of MGMT's "Electric Feel." And then there's "Novacane," a dreamlike midtempo tale filled with drugs, conquests, and anxiety. Oddly (or fittingly) enough, it's one of the most realistic, down-to-earth songs on the set. ~ Andy Kellman, Rovi