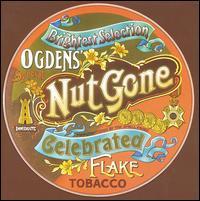 There was no shortage of good psychedelic albums emerging from England in 1967-1968, but Ogdens' Nut Gone Flake is special even within their ranks. The Small Faces had already shown a surprising adaptability to psychedelia with the single "Itchycoo Park" and much of their other 1967 output, but Ogdens' Nut Gone Flake pretty much ripped the envelope. British bands had an unusual approach to psychedelia from the get-go, often preferring to assume different musical "personae" on their albums, either feigning actual "roles" in the context of a variety show (as on the Beatles' Sgt. Pepper's Lonely Hearts Club Band album), or simply as storytellers in the manner of the Pretty Things on S.F. Sorrow, or actor/performers as on the Who's Tommy. The Small Faces tried a little bit of all of these approaches on Ogdens' Nut Gone Flake, but they never softened their sound. Side one's material, in particular, would not have been out of place on any other Small Faces release -- "Afterglow (Of Your Love)" and "Rene" both have a pounding beat from Kenny Jones, and Ian McLagan's surging organ drives the former while his economical piano accompaniment embellishes the latter; and Steve Marriott's crunching guitar highlights "Song of a Baker." Marriott singing has him assuming two distinct "roles," neither unfamiliar -- the Cockney upstart on "Rene" and "Lazy Sunday," and the diminutive soul shouter on "Afterglow (Of Your Love)" and "Song of a Baker." Some of side two's production is more elaborate, with overdubbed harps and light orchestration here and there, and an array of more ambitious songs, all linked by a narration by comic dialect expert Stanley Unwin, about a character called "Happiness Stan." The core of the sound, however, is found in the pounding "Rollin' Over," which became a highlight of the group's stage act during its final days -- the song seems lean and mean with a mix in which Ronnie Lane's bass is louder than the overdubbed horns. Even "Mad John," which derives from folk influences, has a refreshingly muscular sound on its acoustic instruments. Overall, this was the ballsiest-sounding piece of full-length psychedelia to come out of England, and it rode the number one spot on the U.K. charts for six weeks in 1968, though not without some controversy surrounding advertisements by Immediate Records that parodied the Lord's Prayer. Still, Ogdens' was the group's crowning achievement -- it had even been Marriott's hope to do a stage presentation of Ogdens' Nut Gone Flake, though a television special might've been more in order. ~ Bruce Eder, Rovi