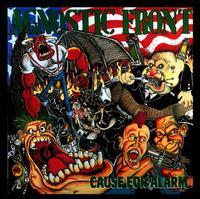 The lines between punk rock and heavy metal have become significantly blurred, but back in the '80s these two musical tribes were engaged in constant warfare for popular music's outer-fringe supremacy. Indeed, for all of their respective style's shared aggression and mutual sense of social ostracism, punks and metalheads were, by all counts, mortal enemies, water and vinegar, and intermingling between the two was almost unheard of. That is until 1985, when bands like C.O.C. and D.R.I. came along and fused the two genres with groundbreaking LPs, Animosity and Dealing With It, respectively. Not far behind were New York's fast-rising Agnostic Front, whose 1986 effort Cause for Alarm is still regarded by many as the definitive crossover album. A sonic "peace-pipe" of sorts, it exposed many metal fans to punk rock for the first time, and vice versa, with songs like "Time Will Come," "Toxic Shock," and "Public Assistance" combining metal's tightly wound precision with punk's raw energy surge. Opening track "The Eliminator," on the other hand, is pretty much straight-up speed metal, and, as if to assert their new direction, the band also re-recorded first album favorite "Your Mistake" in a significantly more metallic version. Understandably, many among the band's original fan base felt betrayed by Agnostic Front's daring new direction, and Cause for Alarm remains a hotly debated album to this day. Whatever your position, however, there is no denying its irresistible, nearly overwhelming power. ~ Eduardo Rivadavia, Rovi