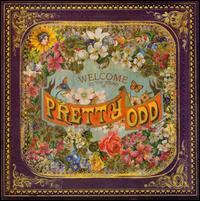 Panic! At the Disco

Tempting as it may be, don't read the dropping of the exclamation point from Panic at the Disco's name as a sign that the emo quartet is in a rush to be taken seriously. Don't even take their blatant aping of Sgt. Pepper's on Pretty. Odd as indication that Panic at the Disco wants to be taken seriously. There doesn't seem to be a serious bone within the bodies of any of the four members, but the wondrous thing about Pretty. Odd is that it's impossible to discern what silliness is intentional and what is accidental, the product of a band discovering the Beatles long after their 2005 debut A Fever You Can't Sweat Out turned into a hit. There's a startling naïveté to PATD's sudden immersion in symphonic psychedelic pop; the band is either too young or dumb to not realize that they're putting together familiar elements wrong, or that they shouldn't be attempting the baroque ballads and vaudeville shuffles that pepper this album...but they're smart enough to send-up the opening of Pepper's, twisting the Beatles' declaration that they were now Sgt. Pepper's Lonely Hearts Club Band around, claiming that they're they same band they always were. Of course this is a bald-faced lie, as the only clear remnants from PATD's debut are the overly complicated song titles and fussy lyrics, but few will complain as the group retain their theatrical ridiculousness while unveiling a newfound panache for pop, all derived from their desire to pattern themselves after the Beatles. Panic at the Disco are hardly the first modern rock band to slavishly follow the example of their peers -- My Chemical Romance copied every one of Queen's exaggerated moves for The Black Parade, while the Killers treated Sam's Town as if it was a Springsteen coloring book -- but PATD's clueless, audacious thievery of the Beatles pays back far greater dividends, partially because stealing from the Fab Four guarantees an emphasis on melody over style, but also because PATD shows far more humor than MCR or the Killers. That humor -- and it's possible to laugh at and laugh along with the band in equal measure here -- makes Pretty. Odd a giddy absurdity, as Panic at the Disco is determined to have it both ways: to make grand, pompous music while retaining their identity as pranksters. The album is so out of control, it's hard to tell whether the group planned Pretty. Odd to be a kaleidoscopic mess, or if occurred by happenstance, but that raggedness will appeal to the teens who loved A Fever You Can't Sweat Out, but this bafflingly blurred Brit-pop could hook in older listeners, too, either through its genuine tunefulness or through pop junkies who will marvel at how "Folkin' Around" comes startlingly close to re-creating the sound of the Byrds circa Sweetheart of the Rodeo, or how "Do You Know What I'm Seeing" is equal parts Morrissey parody and homage. It all adds up to a pretty and odd record and it erases no suspicions that the band aren't quite sure of what they're doing, but the glorious thing about Pretty. Odd is that the album works in spite of this...or perhaps because of it. Either way, this is a deliriously jumbled, left-field delight. ~ Stephen Thomas Erlewine, Rovi