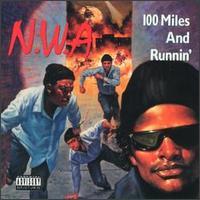 Following a round of Ruthless Records releases (Eazy-E's Eazy-Duz-It, 1988; the D.O.C.'s No One Can Do It Better, 1989; Above the Law's Livin' Like Hustlers, 1990) and the departure of group member Ice Cube (who released a very successful debut, AmeriKKKa's Most Wanted, 1990), Dr. Dre went about producing new N.W.A music for a follow-up to Straight Outta Compton (1988). 100 Miles and Runnin', a five-track EP, was the first material to surface from the recording sessions, released in summer 1990 partly as a response to Ice Cube's departure (both Dr. Dre and MC Ren take verbal shots at him), a preview of what fans could expect on the group's forthcoming album (promoted on the two-minute, EP-closing "Kamurshol"), and a stopgap measure for a marketplace hungry for cutting-edge gangsta rap. The EP's title track is a clear highlight and is among N.W.A's all-time greatest efforts. Driven by a densely layered, fast-paced production, "100 Miles and Runnin'" is perhaps most noteworthy for its second verse, where Dr. Dre uncharacteristically delivers a fierce verse that stylistically resembles Ice Cube's classic opening verse from "Straight Outta Compton." The second song, "Just Don't Bite It," is another highlight, an alarming porno rap that at the time of its release was as explicit as anything out there, including 2 Live Crew. The third song, "Sa Prize, Pt. 2," is a passable "Fuck tha Police" rehash that suffers for the absence of Ice Cube, while next and final song on the EP, "Real Niggaz," is a fairly uneventful hardcore rap purposefully laden with the N-word. In little over 20 minutes, 100 Miles and Runnin' manages to broach the key gangsta rap points of controversy -- fleeing and/or killing the police, pornographic sex, obscenity, and extreme aggression -- as well as diss Ice Cube and promote the upcoming album. Years later, the controversial aspects of 100 Miles and Runnin' may seem ho-hum -- at least to anyone conditioned to expect such rhetoric from hardcore rap music -- but it's important to put this EP into its proper context, for the boundary-pushing showcased here was alarming for its time and a major reason why N.W.A earned such renown. ~ Jason Birchmeier, Rovi