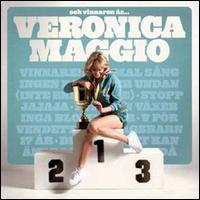 After making her critically acclaimed album debut with Vatten & Bröd (2006), which won her Newcomer of the Year at the 2007 Swedish Grammy Awards, Veronica Maggio returned with Och Vinnaren Är..., a follow-up album that is not only more personal and unique than her debut was, it's also much better. No doubt about it, Vatten & Bröd was a difficult album to follow. It was something of a sensation at the time of its release. Produced, written, and composed by Stefan Gräslund, Vatten & Bröd cast Maggio as Sweden's answer to Lily Allen and Amy Winehouse, the pair of British pop starlets who were riding high on the success of their respective albums Alright, Still (2006) and Back in Black (2006). Like those albums, Vatten & Bröd features a charismatic young lady in a dress, singing confessional lyrics to well-arranged pop songs with lightly thumping beats à la Mark Ronson. With her second album, Maggio takes strides toward becoming her own woman. For one, she switched producers, ditching Gräslund in favor of Oskar "Kihlen" Linnros, a member of the Swedish rap groups Snook and Maskinen. While best-known as a rapper, Kihlen is an accomplished producer and songwriter who plays up the soul-pop aspect of Maggio's music, crafting a set of songs that hark back to the Motown girl group sound of the '60s (e.g., the Supremes). The throwback arrangements, comprised variously of horn blasts, orchestral strings, piano runs, and rattling percussion, are generally driven by hip-hop breakbeats, which give the songs a touch of modernity. Not only did Maggio ditch Gräslund as her producer, she also took to penning her own lyrics. The set of songs she wrote are more personal than those of her debut, and this injection of personality helps differentiate Maggio from the myriad throwback pop singers of the female persuasion who arose in the wake of Allen and Winehouse's breakout success. Just as Vatten & Bröd spawned a series of singles ("Dumpa Mig," "Nöjd?," "Havanna Mamma"), Och Vinnaren Är... boasts several standouts. Best of all is the lead single, "Måndagsbarn," graced with a floor-stomping beat, lots of sharp string stabs, layered chorus vocals, and a catchy refrain. The follow-up singles "Stopp" and "17 År" are also great, the former of which is most memorable for its hip-hop-isms and horn blasts, the latter for its Philly soul-esque string arrangement. These singles are better than those on Vatten & Bröd, and so is the overall album. With its occasional mini-song interludes and its played-up soul-pop aspect, not to mention the more personal songwriting, Och Vinnaren Är... is certainly more interesting than its predecessor, and it's also more unique, signaling Maggio's emergence as more than just another charismatic young lady in a dress who sings confessional pop songs with a throwback style., Rovi