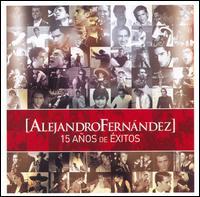 Fifteen years after making his self-titled full-length solo album debut in 1992, Alejandro Fernández finally saw some of his greatest-hits compiled in a thoughtful manner on 15 Años de Éxitos. Unlike the only other greatest-hits compilation in his back catalog, the slapdash box set Mis Primeros Éxitos (1999), 15 Años de Éxitos is judiciously compiled, selecting key hit singles from eight of his albums, including five Billboard chart-toppers, plus his recent performance of the Aleks Syntek song "El Lado Oscuro del Amor" from the El Búfalo de la Noche (2007) soundtrack. Even better, 15 Años de Éxitos is sequenced linearly, beginning with four hit singles from A Corazón Abierto (2004) -- "Me Dediqué a Perderte," "Qué Voy a Hacer con Mi Amor," "Qué Lástima," and "Canta Corazón" -- and then skipping back seven years to a pair of number one hits from his mainstream breakthrough album, Me Estoy Enamorando (1997) -- "No Sé Olvidar" and "Si Tú Supieras" -- before returning to a linear sequence with the title track from Niña Amada Mía (2003). While the pair of Me Estoy Enamorando songs are the only inclusions out of order (not counting "El Lado Oscuro del Amor," which is tacked on as a bonus track), they fit in well where they're sequenced; produced by Emilio Estefan, Jr., and written by Kike Santander, they're the glossiest, poppiest songs here, so it's fitting to have them slotted alongside the songs from A Corazón Abierto -- also a pop album, more or less -- rather than amid the more traditionally stylized music that follows. Indeed, the latter half of 15 Años de Éxitos, which includes songs from the albums Orígenes (2001), Mi Verdad (1999), Muy Dentro de Mi Corazón (1996), Que Seas Muy Feliz (1995), and Piel de Niña (1993) in reverse chronological order, is much more traditional than the first half, generally more in line with pure ranchera than the pop-inflected style of Me Estoy Enamorando and A Corazón Abierto. In fact, as 15 Años de Éxitos plays out, steadily moving backward in time, the reversion of Alejandro Fernández the modern-day hitmaker to Alejandro Fernández the Little Colt (nicknamed El Potrillo early in his career because he was following in the footsteps of his father, the legendary Vincente Fernández) is interesting to consider as well as a pleasure to hear. ~ Jason Birchmeier, Rovi