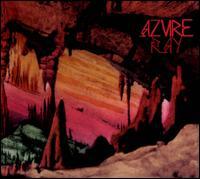 As Above So Below

After a seven year hiatus, Athens, Georgia dreamweavers Azure Ray returned to the blissful folk-pop of their earliest material with comeback album Drawing Down the Moon. The duo of Orenda Fink and Maria Taylor built much of their sound on gorgeously blended harmonies, but the instrumentation of acoustic instruments flirting with subtle electronic undertones added texture and mystery to their indie folk landscapes. With As Above So Below, Azure Ray depart somewhat from their established sound, honing in on dark, softly swirling atmosphere and relying almost completely on electronic instruments. Harmonies are still the star of the show, but on this relatively short, six-song album, the backdrop is decidedly more foreboding. The chilling lyric "If you could guess how the world would end...," opens the album's first song "Scattered Like Leaves," a coldly stoic look at the inevitable end of all love, and all things. Composed of just muted electronic drums and various synthesizer tones, the song is a minimal landscape. Much of the album follows suit, with spare electronics making lots of room for Fink and Taylor's lush vocals to rise to the surface. The vocals never overtake the tunes, though, as heavy doses of delay and processing saturate the tones, meshing the vocals into the larger arrangements rather than pushing them to the forefront of the mixes. "Red Balloon" is one of the pop-friendliest moments on the album, with a sadly soaring chorus made enormous by the duo's heartstruck harmonies. "Unannounced" and "To This Life" both toy with James Blake-like dubstep elements; slightly off homespun beats, bass wobbles, and vast amounts of negative space. With the exception of a few uncouth blurts of sound on "We Could Wake," the album avoids a lot of the novice pitfalls of first attempts at electronic dabbling, possibly due to the involvement of ex-member of the Faint (and Orenda's husband), Todd Fink, in production. Clocking in at just over 20 minutes, As Above So Below shouldn't feel like a proper album, but somehow it does. Despite its brevity, the songs strike with such languid, metered force they manage to slow time down, stretching an EP's worth of darkly ambient dream pop into a deceptively epic micro-journey. The move toward completely electronic arrangements suits Azure Ray nicely, and the songs take immediate and unignorable shapes, feeling serious and attention-demanding without any sense of urgency. It's a bewitching new chapter of the dreamlike state the band have been working on since their inception, and for the most part, that transition feels so seamless it's almost as though they've been there all along. ~ Fred Thomas, Rovi