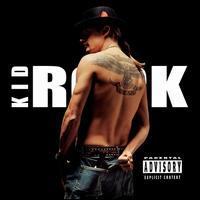 Kid Rock gained his fame as a white-trash rapper, but he retained his fame as a white-trash rocker, using the breakthrough of 1998's Devil Without a Cause to refashion himself as a modern-day blue-collar rocker, as comfortable with crunching bluesy riffs as he is with heartbroken country. The former Bob Ritchie started this transformation on 2001's Cocky, an enjoyably jumbled album that didn't quite take off until "Picture," his straight country duet with Sheryl Crow, was embraced by country radio, reviving the album and even bringing him nominations from the CMA. Kid was already in the process of abandoning metal and, to a lesser extent, hip-hop, so he seized this opportunity to become a full-out rocker and outlaw country singer with his next album, 2003's Kid Rock. Many of Kid's signatures are still in place -- the bragging, the boasting, the songs about sex, fame, and rock & roll, the hard riffs, the self-mythology -- but it no longer sounds like a mix of David Lee Roth and the Beastie Boys (even if the latter's Rod Carew rhyme from "Sure Shot" is lifted for "Intro," just moments after a "So Whatcha Want" reference); it sounds as if Hank Williams, Jr. and David Allan Coe are his new role models. Both Hank and Coe have a similar sense of inflated ego and penchant for name-dropping that borders on self-parody, and Kid Rock follows the same path here, particularly on the numerous rockers -- rockers that range from the heavy, heavy "Jackson, Mississippi" to laid-back, loose-limbed boogies like "Rock n' Roll Pain Train." He wisely plays up the sensitive side of "Picture," too, borrowing from DAC's soul-searching ballads and Bob Seger's introspective numbers. He even revives "Hard Night for Sarah," a song Seger wrote and recorded in 1979 but never released (something that likely wouldn't have happened if he hadn't switched management to Seger's longtime partner, Punch Andrews), and the tune, along with the similarly effective original "Single Father" (inexplicably listed as a bonus track, when there is no other release of the album without it), gives Kid Rock an emotional underpinning it needs, since so much of this is nothing but good-time music. Of course, there's nothing wrong with good-time music, and Kid is proud to make party music -- which he should be, since he does it well. Song for song, this is better-written and harder-rocking than Cocky, and while it's easy to wish that Kid was still as witty and funny as he on Devil Without a Cause, there's a certain cornball charm to his unabashed silliness and how he treats every rock & roll cliché as if it was a newfound truth. That's the power of Kid Rock's personality -- he may blatantly borrow from his influences, and he may recycle and celebrate shopworn clichés, but he does it with flair, style, good hooks, and charisma that shines through on each track. It's what makes Kid Rock -- both the artist and the album -- kind of irresistible. As silly, foul-mouthed, and obvious as he is, he does it so well you just can't help but like the guy. ~ Stephen Thomas Erlewine, Rovi