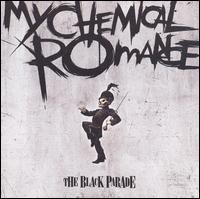 At the heart of My Chemical Romance lore is the story of lead singer/songwriter/mouthpiece Gerard Way, an animator who decided to abandon illustrations and do "something with his life" in the wake of 9/11. Needless to say, that "important" thing was My Chemical Romance, which quickly rose to prominence among the emo and neo-punk bands that cluttered the rock landscape of the 2000s thanks in large part to "I'm Not OK (I Promise)," a surging piece of emo pop with a hook as ridiculously catchy as its title was ridiculous. It deservedly became a hit on both sides of the Atlantic in 2005, dragging its accompanying album -- 2004's Three Cheers for Sweet Revenge, the group's second -- along for the ride, turning MCR into stars, at least in modern rock circles. But, anybody who didn't follow the fashions of emo and punk closely might have ignored the group's tragic, romantic neo-goth image and merely assumed that MCR was another good poppy punk one-hit wonder, not far removed from, say, Fall Out Boy. My Chemical Romance intended to dispel all such misconceptions with their third album, The Black Parade, an unabashed, old-fashioned concept album, complete with characters wandering through a vague narrative that concerns very big themes like death.

Actually, death is the only big theme on The Black Parade, which shouldn't come as a big surprise for a band that named their stopgap live album Life on the Murder Scene, nor should the record's theatricality come as much as a shock, either -- tragedy and melodrama are hardwired in the group's DNA, as illustrated by the often-told tale of Way's inspiration to form the band. Also, it's not as if The Black Parade is MCR's first concept album, either. Their 2002 debut, I Brought You My Bullets, and its follow-up, Three Cheers, told the interlocking story of doomed lovers on the run from vengeful vampires or some such nonsense, but only the hardcore who were willing to analyze endlessly on the Internet were aware of this; based on pure sound, MCR was an emo-punk band through and through, screaming out their feelings as if they were revelations, so it was easy to assume that their music was merely autobiographical. My Chemical Romance took great pains to have The Black Parade seem like its own theatrical work, launching a whole Web-based campaign, filled with videos and interviews explaining how the album tells the tale of "the Patient," a young man dying of cancer in a hospital bed who flashes back on his undistinguished life upon the moment of his death, and how the band got so into this project they considered themselves not My Chemical Romance, but a band called the Black Parade -- shades of the Beatles and Sgt. Pepper! Naturally, those allusions are quite deliberate, and one that MCR played up in that pre-release campaign, dropping liberal reference to Queen (particularly A Night at the Opera) and Pink Floyd's The Wall as well.

It was all quite reminiscent of how the Killers set up Sam's Town with endless name-dropping of Bruce Springsteen and U2, but where the Las Vegas quartet wound up with an unholy fusion of these two extremes, MCR never synthesizes; they openly steal from their holy trinity, then graft it upon the sound they've patented. Often, it seems as if they copied The Wall onto tracing paper and placed it upon Three Cheers. The story of The Black Parade is nearly identical to The Wall -- Pink and the Patient run through a litany of childhood and adulthood traumas; absent fathers loom large; many of the main character's flaws are cruelly deemed the fault of the mother -- and there are plenty of flourishes lifted from Roger Waters' magnum opus: the opening fanfare "The End" is a re-creation of "In the Flesh," right down to the churning heavy guitars that come crashing in halfway through, while "Mama" -- shades of "Mother"! -- sounds like Green Day performing "The Trial," as Way affects Billie Joe's affected mock-English accent as he comes tantalizingly close to following "You should have raised a baby girl/I should have been a better son" with "The way you made them suffer/Your exquisite wife and mother/Fills me with the urge to defecate." These are not the only allusions to classic concept albums, either -- as promised, guitarists Ray Toro and Frank Iero conjure Brian May's spirit, "Cancer" recalls Sgt. Pepper as filtered through Oasis -- but The Black Parade doesn't feel like a revival of '70s prog as much as it hearkens back to the twin towers of mid-'90s concept alt-rock: the Smashing Pumpkins' Mellon Collie and the Infinite Sadness and Marilyn Manson's Antichrist Superstar. Manson's enduring fascination with the grotesque echoes throughout the album, from the artwork through Way's overcooked, bluntly ugly lyrics (highlighted by "soggy from the chemo"), but its heart lies with the Pumpkins, and not just because after his Parade makeover Way strongly resembles Billy Corgan.

Like the Pumpkins, My Chemical Romance shares a love of classic metal that manifests itself in both pummeling riffs and soaring guitar solos, plus they also have a flair for melody, two things that give their solipsistic rock muscle and grandeur. If MCR didn't have these gifts, The Black Parade would collapse in a pile of drama club clichés, sophomoric self-pity, and an adolescent obsession with death, yet they manage to skirt such a disaster even if they flirt with it shamelessly. But that doesn't necessarily mean that the album is a triumph. For one, The Black Parade plays a lot straighter than it reads. Sure, it has the marching bands, overdubbed choirs, radio-play theatrics, and Liza Minnelli cameos, a list that makes the album sound like a wild Grand Guignol rock opera but all of that winds up being window dressing to music that often isn't far removed from what My Chemical Romance has done before. Despite all these seemingly fancy accouterments, they're still a modern emo-punk band, which means for all the emotion poured out by their ever-earnest lead singer, there's little grit in their sound and Rob Cavallo's brittle production doesn't help, as its wall of digital sound emphasizes the sonic similarities between the songs instead of their differences. And there are a lot of similarities here: the bulk of the record is firmly within MCR's comfort zone, which helps make the extra flair -- which doesn't arrive as often as it should -- stand out all the more. But even if this isn't quite the radical break that it was intended to be, MCR does their signature blend of Sturm und Drang better than ever -- "Dead!" rushes along on a series of escalating hooks, "This Is How I Disappear" surges with purpose -- and when they're paired with tunes that do break the mold, like the wonderfully pompous title track "Welcome to the Black Parade" or "Teenagers," a tremendous reworking of the "Bang a Gong"/"Cactus" riff that is the simplest and best song they've ever written, it makes for a record that's their strongest, most cohesive yet, even if it isn't quite as weird or compelling as it should be given the group's lofty ambitions. ~ Stephen Thomas Erlewine, Rovi