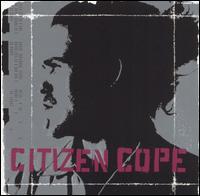 If there were such a thing as an urban beatnik, Citizen Cope, aka Clarence Greenwood, would be it. His unique message-oriented self-titled debut is in the spirit of music by Wyclef Jean and Arrested Development, but rich in his own brand of underground street stylings, which find their flavor in the sounds and soul of the Deep South. The album combines an ever-so-slight bit of island flavor, R&B, hip-hop, smoky-club lounge, and blues. The former live keyboardist and DJ for Basehead fills his songs -- which are often cool, laid-back, and understated -- with messages surrounding the struggles of life, but more so, street life. And Greenwood's voice is smooth and full of yearning, but not over the top. It can be likened to the style of Maxwell. Listeners, whatever they take from this innovative disc, will no doubt walk away feeling as if they just exited a small, hole-in-the-wall club -- the kind that oozes character and atmosphere -- at six AM, squinting at the blaring morning sun. There are many winning moments on this disc. "Contact" describes how cops sometimes wrongfully stop and even arrest youth. The slow and shuffling "If There's Love" is steeped in Southern blues flavor and portrays love's power to lift the human spirit in a difficult world. Elsewhere, "Salvation" and "Holdin' On," in their understated and minimalist approach, are the disc's home runs. The bare yet abundant tracks feature a shuffling snare and brush playing, with Greenwood's haunting and raspy voice floating on top. Greenwood is an artist with very personal and social messages on his mind. His outlet for these thoughts is a musical soundtrack in a class all by itself. Whether the theme is perseverance, street hustling, or lust, Greenwood gets his point across loud and clear in his modest approach, and captivates audiences with his cool and hypnotic brand of underground street music. After listening to this choice disc, it becomes clear as to why Greenwood chose Citizen Cope as his performing name. He, like everyone else, is just trying to live through the day, as his music suggests. For those looking for an inspiring, creative, and refreshing outlet to help them cope in daily life, or if you're simply looking to enjoy some great, unconventional music, this winning debut will more than get you by. ~ Liana Jonas, Rovi