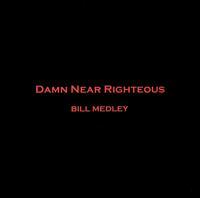 Bill Medley's voice is one of the most recognizable in pop history, if only for the fact that "You've Lost That Lovin' Feelin'," the Righteous Brothers' 1964-1965 number one, has, according to BMI, been played on the radio more than any other song in history. Medley was the deep-voiced half of that team, and although he's maintained his recording and performing career throughout the decades, both with his late partner Bobby Hatfield and on his own, it's pretty much a given that he will forever be associated with that song. Damn Near Righteous is Medley's first solo album in ten years, and the first since Hatfield's 2003 death, and while it won't alter his role in rock history -- he's already a member of the Rock & Roll Hall of Fame -- it's a commendable effort that nicely showcases Medley's R&B-influenced vocal style. That voice is not, admittedly, what it used to be: it's much coarser now than it was during the heyday. But Medley puts it to good use on a collection of both new songs and well-chosen covers. Not surprisingly, perhaps, his interpretations of R&B and rock classics are most effective. Medley does wonders with the Ray Charles standard "Lonely Avenue," and gets a groove going on Earl King's "Trick Bag." He takes Bob Dylan's "Just Like a Woman," strips it down so that he's accompanied solely by a bluesy piano, and gives the song a reading that utterly transforms it. The undeniable highlight of the album, however, is Medley's gravelly, dirge-like reworking of the Beach Boys' "In My Room." Imagine a slightly less parched Tom Waits on the lead vocal, except for one classy touch: sweet harmony voices provided by none other than the song's composer, Brian Wilson, and Phil Everly of the Everly Brothers. The original material is less noteworthy, although the album-closing "California Goodbye," a tribute to Hatfield written by producers Steve Dorff and Shayne Fair, is appropriately mournful and sung with true heart and soul. There are moments on Damn Near Righteous that flirt with the schmaltzy, but Medley is the kind of singer who can overcome just about any obstacle -- he even put some verve into "I've Had the Time of My Life," his treacly smash hit duet with Jennifer Warnes from the Dirty Dancing soundtrack -- and there's nothing here that remotely aims toward that segment of the mainstream. It's tempting to think that Damn Near Righteous would have made a hell of a Righteous Brothers album -- the title sorts of begs that consideration, doesn't it? -- but even more likely that it never would have been made at all had that act still been soldiering on. ~ Jeff Tamarkin, Rovi