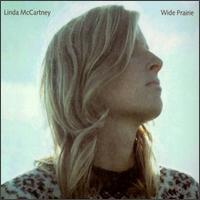 Toward the end of her life, Linda McCartney compiled an album of her solo recordings with the assistance of her husband Paul. She died before she had a chance to complete it, but Paul proceeded to finish the album, Wide Prairie, and release it in the fall of 1998 as originally planned. Clearly, it was a labor of love for the pair, since they spruced up 25-year-old tapes and recorded brand-new songs, all when she was suffering from breast cancer. Consequently, it's hard to say anything bad about Wide Prairie, since that would be distasteful, but the fact remains that the album is wildly uneven. Much of that is due to the fact that it contains every scrap of tape Linda recorded over 25 years, a tactic that could never produce a coherent record. That is a bigger problem than her meager musical talents, actually, since even weak songs can gel into a homogeneous listen. Wide Prairie, however, jumps all over the place, and while there are a couple of songs in a similar style, such as two bizarrely innocuous covers produced by Lee "Scratch" Perry, they're separated by several songs. Such an approach makes the compilation feel like the McCartneys' albums from the early '70s (McCartney, Ram, Wild Life), complete with a similar ramshackle charm. The difference is, the songs aren't there. There are a few enjoyable tunes (more than you might expect, actually), but they're slight, albeit endearing. Ultimately, that's the key to Wide Prairie -- sure, it's uneven and Linda's musical talents were limited, but it's hard to dislike the album if you've ever been a fan of the McCartneys' early-'70s albums, since you'll be predisposed to accept the loose ends and silliness that distinguish the record. Even if Wide Prairie doesn't establish Linda McCartney as a significant musical talent, it does function as a loving tribute to a woman who, from all accounts, was kind, generous, and loving, which is all it ever needed to do. ~ Stephen Thomas Erlewine, Rovi