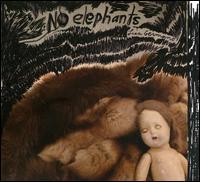 To call a Lisa Germano album delicate is akin to describing water as wet. Germano's songs are so intimate, both lyrically and sonically, that they can sometimes induce vertigo, especially when administered through headphones. No Elephants, her ninth studio outing, doubles down on that notion, offering up another dreamlike set of gossamer ballads that are made all the more impressionistic by a bevy of ambient samples (bees, cell phones), drum loops, and other assorted audio emissions, resulting in the listener having to come up with his/her own impressionistic assessments like "post-rain, pre-dawn bird feeder jams" or "this must be what the inside of a dollhouse sounds like." Like most Germano offerings, the effect is both jarring and exhilarating, and at a mere 35 minutes long, it's well worth the occasional twinge of discomfort. Framing the album around the ever widening chasm between the natural and digital worlds, best summed up in the chorus of the soft-focused title track ("All plugged in and tuned out/No elephants around"), Germano's gift for conjuring otherworldly melodies is as strong as ever. That said, she's still, and will always be, a niche artist, and outside of Tilt-era Scott Walker, probably the least likely to make a fortune selling ringtones, but her divisive voice, which still sounds as if it's being delivered telepathically into your head, has lost some of its more obtrusive affectations, allowing standout tracks like "Ruminants," "Apathy and the Devil," "A Feast," and "Strange Bird" the space they need to work their distinct, hallucinatory magic. ~ James Christopher Monger, Rovi