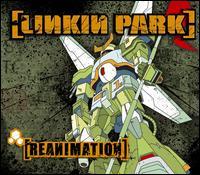 The remix album -- the time-honored tradition of buying time between records. Often, these are inconsequential affairs (Limp Bizkit's New Old Songs leaps to mind, for some reason), but if a band is smart, they can use this time-buying ploy to their advantage, redefining their sound somewhat, or at least reaching out for that elusive street credibility. The latter option is especially true for bands that have a big, big chart hit on their hands but little critical respect or reputation as a hip band. Which brings us to Linkin Park's Reanimation, a generous 20-track remix record of their debut Hybrid Theory that the band has vaguely alluded to as their art project. That means the group has left the hamfisted alt-metal of their debut behind, turning this record over to rappers, remixers, DJs, and assorted producers to give it a darkly hip, electronic edge. This may not be particularly pleasing to those who loved the angst-ridden rock theatrics of the debut, but it's a damn sight more interesting than that debut, helping Linkin Park distinguish themselves from the adolescently tortured rap-rock pack. The paradox is, of course, that the band sounds more original when filtered through the likes of Kutmasta Kurt, Alchemist, Pharoahe Monch, Aceyalone, and Jonathan Davis, among others, but any change is welcome, really (well, apart from the apparent decision to leave grammar and spelling behind; every song title is an "arty" interpretation of the original title -- "Paper Cut" is "Ppr:Kut," "Cure for the Itch" is "Kyur4 th Ich," etc. -- resulting in a silly mish-mash of letters and numerals). Some of this works quite well, some of it is kind of juvenile (really, does Motion Man need to repeat "Linkin Park -- remix" over and over again on his rap?), much of it is only slightly recognizable from the original, it's too long, and compared to contemporary arty rock (Radiohead, Flaming Lips, Clinic, Trail of Dead, System of a Down, Interpol, etc.), it really isn't that arty. But, compared to what they've done before, and compared to their peers, Reanimation is arty and a welcome step in the right direction. ~ Stephen Thomas Erlewine, Rovi