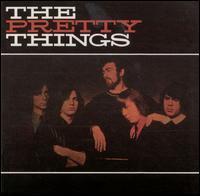 The Pretty Things' debut LP was a legendary exercise in anarchy -- 30 minutes into the two days' worth of sessions, their original producer, Jack Baverstock (the head of the label, no less), walked out, and was eventually replaced by a slightly more sympathetic personality in the hopes of salvaging something from the efforts of the band, who, whatever their shortcomings in decorum or sobriety, were on their third successive charting single. The resulting album, made under the coordination (if not control) of drummer-turned-producer Bobby Graham, made the early work of the Rolling Stones -- rivals and one-time bandmates to the Pretty Things' Dick Taylor -- sound more like the work of the Beatles: very calculated, lightweight, and...genteel. The Pretty Things is recorded with practically every song and instrument pushing the needle into the red (i.e., overload). Normally, that would be a problem, except for the fact that a third of the repertory was written by Bo Diddley and most of the other two-thirds was inspired by him (even their version of Chuck Berry's "Oh Baby Doll" sounds like it was lifted from the Two Great Guitars sessions where the two legends crossed swords) -- and Bo spent most of his career with his amplifiers set on "11" in a world where ten was the max.

"Roadrunner" is about as raw and loud as British rock & roll ever got up to that time, and it's just the beginning -- "Judgement Day" has a lead guitar buried somewhere in there, beneath rhythm instruments that sound like metal being ground up, and "13 Chester Street" is, strangely enough, an homage to the house the band once shared with the Stones' Brian Jones; appropriately enough, it mixes the band's crunchy rhythm guitar-centered sound with a Slim Harpo-style lead (all of the stuff that Jones was identified with musically), in a group "composition" that shimmers and pulses around Phil May's dissolute vocals. "Big City" takes them back to Chess Records territory, from which they never stray -- "Mama, Keep Your Big Mouth Shut" even sounds like a Chess outtake, what Leonard Chess would've said needed one more pass to get right (and he'd have been wrong). And just to show that there is some justice in the world, The Pretty Things did reach number ten on the U.K. charts, bewildering all of the more "professional" hands at Fontana Records by grabbing the ears of that harder, more intense part of the Stones' larger audience and throwing them the sonic equivalent of raw meat to chew on. Phil May reveals himself as a fairly powerful singer, though lacking some of the charisma that Mick Jagger projected, but the group's own raw power made for quirky appeal all of its own that would carry them for many years beyond this roaring start. And in the meantime, records like this would point the way not only toward the work of such American garage band icons as the MC5, but blast a path through the wilderness that the likes of Billy Childish and his band the Milkshakes and their successors would traverse. ~ Bruce Eder, Rovi