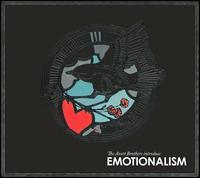 Americana with attitude is the best way to describe the Avett Brothers' music, a sublime blend of folk, country, hillbilly, and blues, swirled through with pop, rock, and a touch of wry punk. In their dreams, it all sounds perfect, but not so much so, they think, when they awake. "Yeah, you deserve the best," they bemoan, not just some "Hand-Me-Down Tune." Well, regrets, we've all had a few, and the Avett Brothers more than some. But if you're going to be filled with "Shame," best to offset your remorse with an incredibly infectious melody. Besides, life is short, and since we're all going to "Die Die Die," we might as well live and love while we can, even if that does just occasionally mean the band must shrug off "All My Mistakes." And love is the paramount emotion of Emotionalism, be it too young (the bouncy "I Would Be Sad"), Spanish-flavored ("Pretty Girl from San Diego"), blues-flecked ("Living of Love"), or exuberant (the British Invasion-styled "Will You Return?"). However, of the many marvelous romantic-themed numbers, the most striking is the romantic tale "The Ballad of Love and Hate," whose opening line, "Love writes a letter and sends it to Hate," immediately grabs your attention. Elsewhere, the band explores other emotions, like the nervousness that infects the otherwise jaunty "Paranoia in B-Flat Major," or the amusing attempts of the band to shrug off the attentions from cities around the country: "Salina" begins in fingerpicking style but ends with evocative classical piano and cello, and "Pretty Girl from San Diego" also shifts tactics from Spanish guitar to a big rock finish. From lullabies to the contrarily rousing singalong party piece "Go to Sleep," the Avett Brothers pick their way through America's folk styles, and deliver them in ways you'd never expect, all wrapped around lyrics, sometimes wry, sometimes dead-serious, but all delivered with the band's signature intensity. A fabulous album from a band that just keeps getting better. ~ Jo-Ann Greene, Rovi