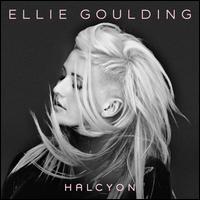 With her 2010 debut, Lights, and the expanded Bright Lights, British vocalist Ellie Goulding bridged the gap between the soulful adult contemporary beltings of Adele and the more primal indie rock gospel of Florence + the Machine. Gifted with a disarmingly throaty -- yet still resonant -- voice and attractive, girl-next-door charisma that combines Kate Bush's cherubic art pop croon mixed with the asymmetrical half-smile charm of Drew Barrymore, Goulding stood out among the sea of post-Imogen Heap synth folk songstresses such as Little Boots, La Roux, and Lykke Li. On her sophomore effort, 2012's Halcyon, Goulding moves in an even more arty, electronic direction. Where Lights featured a handful of well-crafted singer/songwriter-styled singles such as "Guns and Horses" and the disco-bliss number "Starry Eyed," Halcyon keeps the singer/songwriter lyricism, but expands upon the electronic and symphonic palette. Aside from a few songs like the gutting, bittersweet piano ballad "I Know You Care" -- which itself brings to mind her smash 2010 cover of Elton John's "Your Song" -- Halcyon is largely built around epic long-form anthems and shimmery moments of gargantuan synthesizer drama. Tracks like the baroque "My Blood" and lustful club-groover "Figure 8" have a crisp, pulsating electronic buoyancy that, as with all of the songs on Halcyon, vibrate with a palpable dramatic tension. Also in keeping with the arty-electronic atmosphere of the album, Goulding dresses up her powerful lark of a voice with a delicately laced veil of digital effects. She sets these sparkling, multi-tracked vocal sections against roiling arpeggiated grand piano lines, the digital pluck of harps, echoey orchestral samples, and the ever present hum of deep bass synth. Goulding has a strong enough voice that when she toured with the decidedly more rootsy blues and country-influenced American songwriter Lissie in 2010, they brought the house down with several pitch-perfect, soulful duets, so the move toward a more atmospheric, sonically layered approach feels decidedly more like a conscious aesthetic choice. In that sense, she seems to be striking a balance between her more arty inclinations and a kind of adult contemporary, Annie Lennox-style professionalism. Perhaps Goulding illuminates her strong suits best on her enigmatic single "Anything Could Happen," in which she belts out a kind of post-traumatic affirmation for letting go and moving on to brighter things. She sings "Letting darkness grow/As if we need its palette and we need its colour/But now I've seen it through/And now I know the truth/That anything could happen." An ambitious work by an artist intent on developing her total sound, Halcyon finds Goulding poised at the edge of artistic and career possibilities. ~ Matt Collar, Rovi