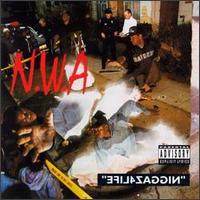 Like 100 Miles and Runnin' (1990), the five-track EP that preceded it, N.W.A's third full-length album, Niggaz4life, courts controversy in every imaginable way, from its title (printed backward on the cover, as a mirror image) down to its mercilessly misogynistic second half, and it remains shocking years later, no matter how many times the controversial aspects of the album have been exploited again and again by others. Unfortunately, the shocking rhetoric -- which, to a degree unprecedented at the time of the album's release, revels in relentless obscenity, graphic sex, and extreme violence -- tends to overshadow the remarkable production work of Dr. Dre here. Similar in practice to the concurrent production work of the Bomb Squad, Dr. Dre and co-producer DJ Yella densely layer soul-funk samples from the 1970s over hard-hitting beats. As he had on his previous productions, Dr. Dre mines the Parliament-Funkadelic back catalog in particular for sample material: for instance, two Eazy-E solo showcases, "Automobile" and "I'd Rather Fuck You," are satirical interpolations of Parliament's "My Automobile" and Bootsy Collins' "I'd Rather Be with You," respectively, while the skits "Don't Drink That Wine" and "1-900-2-Compton" are likewise homage to George Clinton and company -- and, if you're keeping tabs, "Niggaz 4 Life" borrows an elastic bassline from Parliament's "Sir Nose d'Voidoffunk." The album-opening "Real Niggaz Don't Die" is one of the most remarkable productions, comprised of multiple samples, most evidently Rare Earth's "I Just Want to Celebrate," a joyous song whose sampled hook is in great juxtaposition to the overriding dire tone of the production, best characterized by one of the other songs sampled on the track, the Last Poets' "Die Nigger!!!" In terms of rapping, Niggaz4life suffers for the absence of Ice Cube, even as the D.O.C. assumes his position as the in-house ghostwriter. There's a lot of Eazy-E to be heard throughout the album, for better and for worse, as his sense of humorous menace is amusing as well as unsettling. In the end, it's easy to understand why N.W.A unraveled shortly after Niggaz4life: on the one hand, the group had become a vehicle for exploiting the taboos of gangsta rap, to significant commercial success (this was a chart-topping album, after all), while on the other hand, it had become less about the production talent of Dr. Dre, whose work was being sorely overshadowed by all the controversy. ~ Jason Birchmeier, Rovi