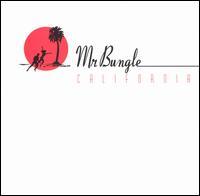 Four years after Disco Volante, Mr. Bungle returns with California, which immediately distinguishes itself from its predecessors -- it's probably their most heavily orchestrated record to date and their most melodic overall, as well as the least dependent on rock styles. That's certainly not to imply that this is a tame or immediately accessible record, nor that Mr. Bungle has suddenly gone sane. There is a stronger lounge-music orientation to the group's trademark rapid-fire genre-hopping; we hear more pop, swing, rockabilly, country & western, bossa nova, Hawaiian and Middle Eastern music, jazz, Zappa-esque doo wop, arty funk, post-rock, space-age pop, spaghetti-Western music, warped circus melodies, and even dramatic pseudo-new age, plus just a smidgen of heavy metal. Sure, some of those sounds have appeared on Mr. Bungle records past, but the difference this time is the focus with which the band deploys its arsenal. California is their most concise album to date, clocking in at around 45 minutes; plus, while the song structures are far from traditional, they're edging more in that direction and that greatly helps the listener in making sense of the often random-sounding juxtapositions of musical genres (assuming, of course, that you're supposed to even try to make sense of them). As with any Mr. Bungle album, California requires at least a few listens to pull together, but its particular brand of schizophrenia isn't nearly as impenetrable as that of Disco Volante, even if it will still make you marvel at the fact that such a defiantly odd, uncommercial band recorded for Warner Bros. ~ Steve Huey, Rovi