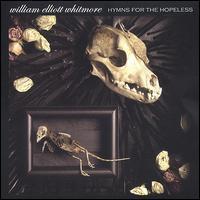 Hymns for the Hopeless

William Elliott Whitmore has the ancient sounding voice of an 80-year-old Appalachian moonshiner, and while he is yet to turn thirty, his bleak and death-haunted tales are full of the kind of regrets that only a long life full of loss and struggle can validate. On Hymns for the Hopeless, his debut release, Whitmore mines a strip of narrow Americana that conjures Dock Boggs more than it does Ralph Stanley, and if this isn't exactly the blues, well, it sure isn't bluegrass, either. Actually, the simple, stark three-note melodies of Whitmore's dirges sound more like church hymns than anything else, and his ragged crow-croak of a voice (which makes Tom Waits sound glib and Leonard Cohen sound like a pop diva) comes from a place where the blues and gospel first converged into country. From the first track, the unaccompanied "Cold and Dead," Whitmore begins an unrelenting search for redemption and reaches out for death as the only true reckoning of a man's life, and if he seems to share little of a street preacher's faith in a paradise beyond that reckoning, he seems to reach out for it anyway, and by the album's closer, the full-tilt gospel romp of "Our Paths Will Cross Again," he seems to suggest that yes, there's hope, even for the hopeless. This is timeless stuff, delivered in stark arrangements of just banjo or guitar, with occasional touches of junkyard percussion, and throughout there is Whitmore's harrowing, convincing voice that sounds like it has crossed the River Styx and returned to preach to the living. If there is a problem with this striking album, it is in a lack of variety, as each song unwinds at the same slow pace, and occasionally Whitmore simply tries too hard and loses believability, as he does with "From the Cell Door to the Gallows," which, although striking, suffers from an obvious case of jailhouse noir, and it is the lone track where Whitmore fails to completely inhabit his voice. In the end, this is an amazing debut, a country album that is as far from today's hat acts as a hat can get, an album of rare artistic courage, one that faces death, embraces it, and comes out the other end in a gospel hoedown. Hymns for the Hopeless is a brilliant beginning for William Elliott Whitmore. ~ Steve Leggett, Rovi