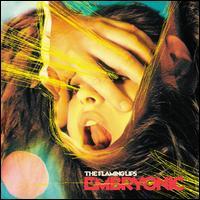 Christmas on Mars might be the Flaming Lips' bona fide sci-fi epic, but Embryonic is the musical equivalent of the final scenes of 2001: A Space Odyssey: transformative chaos that results in a new start. From The Soft Bulletin onward, the Lips seemed focused on tidying the loose ends of their earlier work, almost to the point of constraining themselves. Their wilder side is unleashed on Embryonic's 18 tracks, and the band sounds more off-the-cuff than it has in years -- some tracks are barely longer than snippets, others are rangy epics, and it all holds together so organically that listeners might wonder just how much these songs were edited. Musically, Embryonic is the least polite the Flaming Lips have been in nearly two decades, mixing in-the-red drums, blobby, dubby bass, squelchy wah-wah guitars, and sparkling keyboards into a swirl of sounds that are strangely liquid and abrasive at the same time. Occasionally, the band uses noise in an almost ugly way, as on "Convinced of the Hex," which scrapes eardrums with static and distortion before falling into a loose but driving Krautrock groove that adds to the song's tribal pull (complete with growling and wailing in the background). The Miles Davis-inspired "Aquarius Sabotage" opens fuzz bass and keyboards so chaotic, it isn't just free jazz, it's free-for-all jazz, while "Your Bats" is as soulful as it is noisy, piling roomy drums atop more delicate hand percussion, strings, and brass. The Lips balance these confrontational tracks with calmer moments like the vocodered loveliness of "The Impulse " and "Gemini Syringes," an expansive respite that features "additional spoken announcements" by mathematician Thorsten Wormann. Embryonic might not be a literal concept album, but it often plays like one. An astrology motif runs through the ultra-spacy "Virgo Self Esteem Broadcast" and the tumbling instrumental "Scorpio Sword," another track that suggests that the album's ultimate concept may be that chaos is a profound agent of change. It's also the Flaming Lips' most emotionally raw album, despite -- or perhaps because of -- its free-flowing nature. Wayne Coyne often sounds like he's singing from another dimension, musing on humankind's frailty with the wonder of an alien or a newborn on "If" and "The Sparrow Looks Up at the Machine." This is also some of the band's most bittersweet work; on the beautiful "Powerless," Coyne sings "no one is ever really powerless," but the music dwells on the weighty implications of that thought rather than its potential freedom. Even the playful "I Can Be a Frog," which features Karen O as a one-woman noisemaker, is minor-key. Then again, little about Embryonic is clear-cut or straightforward -- these noisy, pensive, sometimes meandering songs take awhile to decipher and often feel like they're still in the process of becoming. These very qualities, however, make these songs some of the Flaming Lips most haunting and intriguing music in some time. ~ Heather Phares, Rovi