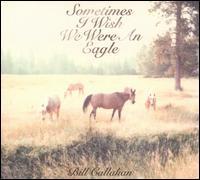 Sometimes I Wish We Were an Eagle

When Bill Callahan left behind his long held Smog moniker, he gave longtime fans of his lo-fi, mopey, sometimes angry aesthetic some real cause for worry: there was not only the name change, but the reliance on more technology that began with the Diamond Dancer EP and the outright lush production (compared to his past work) on Woke on a Whaleheart. Sometimes I Wish We Were an Eagle should give them some cause for relief, though the growth on the previous two offerings cannot be erased. There is no grand statement on Eagle; it's merely the record that comes after Woke on a Whaleheart, but it feels more like a Smog record though it doesn't sound like one. This is the darkest, moodiest set he's issued since Supper in 2003, but it's also easily his most accessible musically and sonically. We don't hear much more than Callahan's idiosyncratic misanthropy offering itself speaking and breathing room on most of these tunes; his baritone is right up front and rarely gets stretched. His themes seem to center on flight and return, and are no better illustrated than on the opening cut, "Jim Cain," where, along a gently shuffling snare and kick drum, his nylon-string acoustic and electric guitars, and a cheap but effective keyboard, his ruminations are guided. They caress that voice out of its hiding place: "...Well I used to be darker/Then I got lighter, then I got dark again/Somethin' to be seen, was passing over/And over me/Well it seemed like a routine case at first/With the death of the shadow, came the lightness of births/In the darkest of nights, the truth still dazzled/And I work myself, until I'm frazzled/I ended up in search of ordinary things..." It's a cause célèbre for the album.

So much here is written, scored for, and sung from, the place Callahan knows all too well, the outsider with the richest of interior lives with numerous motivations. Tracks like "My Friend" express, gently at first then more aggressively, sentiments that may be wholesome in their intent, but in their expression become more aggressive and even slightly sinister.

While Callahan's songs are characteristically simple: the way they are recorded is relatively more complex. Things are not so shambolic; they are carefully measured, tempered, and sequenced. Songs such as "All Thoughts Are Prey to Some Beast," are based on two-chord vamps, and Callahan's voice does nothing to disguise itself as his lines are short, clipped, and shorn of unnecessary verbiage. But the sense of dynamic tension that gathers as violins, lithe, airy electric guitars playing single string leads, syncopated tom-toms, and synth lines that mimic French horns, offer a wider dimensions. Ultimately, this sense of circular motion, whether it's flight and return, the human breath, birth, death, rebirth, loss, and love is the elemental construction of everyday life, and hence a lyrical cornerstone on Sometimes I Wish We Were an Eagle. It is perhaps a seminal new more accessible chapter in Callahan's oeuvre of heretofore lo-fi, strictly outsider music. ~ Thom Jurek, Rovi