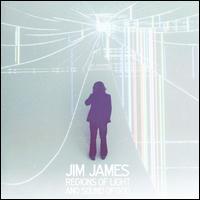 Regions of Light and Sound of God [LP]

In 2008, during a My Morning Jacket concert, frontman Jim James fell from the stage and was injured badly enough to spend three weeks recuperating. During that time, artist Gary Burden dropped by and gave him a copy of Lynd Ward's God's Man, a graphic novel in woodcuts from 1929. The book moved him. The book is about a young artist who seeks redemption while struggling with personal demons. In 2009, he released his first solo EP as Yim Yames, an effort comprised entirely of George Harrison songs. The book and Harrison's spiritual curiosity are muses for Regions of Light and Sound of God, James' debut solo offering -- a charming, messy collection of nine songs that all deal with spiritual concerns -- though never religiously. James played all instruments and voices, and produced it. Set opener "State of the Art (A.E.I.O.U.)" contains a jazzy piano motif (whose idea is borrowed from Traffic's "Low Spark of High Heeled Boys). He never develops it beyond a two-chord vamp, but he adds funky drums for motion. His lyrics offer conflicting metaphorical dualities -- observations on inner and outer worlds, some deliberate clichés, and the vowels in the alphabet. Electric guitar, sparse keyboard washes, and atmospheric string sounds fill it in to create a brooding drama. "Dear One," with its interlocking piano and rhythm loops, is a melodic yet urgent cosmic love song. "New Life" is another; a jaunty, uplifting tune that borrows from doo wop and early rock & roll down to the keyboard sax solo. One can hear ideas drawn from Talk Talk's Colour of Spring album in the single "Know to Now," that's built from the rhythm up. The Middle Eastern modal motif in "All Is Forgiven" is compelling as James' protagonist observes both Judeo-Christian and Islamic faiths and their claim to a true path -- and prays to an undefined God to be shown one, and for the knowledge that the title is indeed true. The familiar sound of chirping birds introduces the loopy, psychedelic, funky soul that drives "Of the Mother Again." Breaks, alternately pitched harmony vocals, a rubbery bassline, a spacy guitar vamp, and minimal keyboard horns populate its mix. It's a summertime groover. The sophisticated pop flirtation in "Actress" belies more serious implications than its breezy melody suggests. Closer "God's Love to Deliver" is a dreamy, poignant space hymn. Regions of Light and Sound of God is intriguing and quirky; its songs often pose big questions inside informal, loosely developed pop song structures that are instantly accessible yet whose lyrics are often metaphysically elusive. [An LP version was also released.] ~ Thom Jurek, Rovi