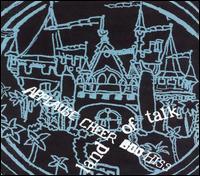 Land of Talk's debut, Applause Cheer Boo Hiss, is built on the kind of deep, dark indie rock that gets under your skin and gives you weird dreams. In other words, it's a good album. It's admittedly small, barely more than an EP, but what's lost in quantity is made up for in quality. R.E.M.'s Chronic Town comes to mind here; these tracks are compact, muscular, built like a cage fighters. Lead singer Elizabeth Powell's honey-stained, black-blue voice is comparable to Chan Marshall's, or maybe even Sarah Blasko's; she sounds like she comes from down South or down under, even if she hails from Ontario. The songs themselves seem like they're made up of the kind of jumpy, punchy, angular indie rock put out by bands like the Yeah Yeah Yeahs, but they're shot through with a kind of muggy, smoky, reverby rock that pulls them into a subterranean world of their own. There's something of the dog days of summer in these tracks, especially in the plodding, reverb-slicked guitars of "Street Wheels" and the mournful, drugged riffs of "Sea Foam." The funny thing is, Land of Talk somehow manage to slap together a group of fairly similar-sounding songs ("Breaxxbaxx," for instance, sounds like a continuation of "Summer Special") without succumbing to monotony. This is an accomplishment for any band, especially a young one like Land of Talk, and hopefully it's an indication that their sophomore follow-up will hold up just as well. Applause Cheer Boo Hiss is a thrilling, moody disc that stands up well to a few spins. One gets the sense that the album could continue for a few more tracks, and that's definitely a good sign. ~ Margaret Reges, Rovi