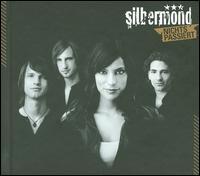 German alternative pop/rock band Silbermond rose to the ranks of Germany's most successful popular music acts with the respective ballads "Symphonie" and "Das Beste" from their first two albums, Verschwende Deine Zeit (2004) and Laut Gedacht (2006). Sung with utter conviction by early-twentysomething vocalist Stefanie Kloß, these self-penned ballads, both of them graced with piano and strings in place of electric guitar riffs and pummeling drum tracks, were a principal reason why Silbermond was chastised by rock purists and self-serious critics alike in spite of the band's chart-topping commercial success, numerous Echo awards, and ever-growing legion of fans, the most devoted of them teenagers. Like its predecessors, the band's third album, Nichts Passiert, reaches its greatest heights during its most vulnerable moments, "Irgendwas Bleibt" and "Krieger des Lichts." Rather than follow the piano-and-strings template of "Symphonie" and "Das Beste," however, these power ballads begin calmly, with the vocals of Kloß to the forefront and the instrumentation of her bandmates resigned to background ambience, while steadily building in tension for a couple minutes. With the precision of German train lines, the songs break wide open around the two-minute mark, and the rocking out commences. If it all seems terribly calculated, as if it were a hit-making formula for sure-fire commercial success, more likely than not it is, and the credit (be it praise or blame) goes to the Valicon production team of Ingo Politz and Bernd Wendlandt. These guys, who produced all three Silbermond albums to date, are so integral to the band that they should be honorary members. Female-fronted alternative pop/rock quartets are a dime a dozen, yet what distances Silbermond from the pack more than anything else is the production work of Politz and Wendlandt. It's a wondrous thing, truly something to behold for those with an ear toward the nuances of 21st century production techniques, as Silbermond's guitars chime and shimmer à la U2 and the rhythm sections thumps and slithers à la Timbaland. Perhaps most impressive from a production standpoint is the aforementioned power ballad "Krieger des Lichts," whose ambient opening is strikingly reminiscent of the classic beat from Massive Attack's "Teardrop." Thankfully, there's much more to Nichts Passiert than its pair of standout power ballads and its cutting-edge production. Also worth noting are the opening pair of songs, "Alles Gute" and "Nichts Passiert," which kick the album off with eight uninterrupted minutes of thrilling hard rock before giving way to the suite of power ballads (also including "Ich Bereue Nichts"). There are also a couple of superstar guest features by Jan Delay and Xavier Naidoo that pop up during the latter half of the album and spice up the proceedings from a stylistic standpoint. ~ Jason Birchmeier, Rovi