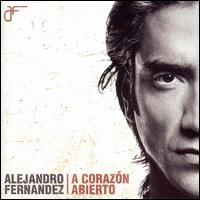 On A Corazón Abierto Mexican superstar Alejandro Fernández returned to Latin pop music for the first time in four years. Despite several album releases in the meantime, including Orígenes (2001), Un Canto de México (2002), Niña Amada Mía (2003), En Vivo: Juntos por Ultima Vez (2003), and Zapata: El Sueño del Héroe (2004), Fernández chose with each to focus on traditional Mexican music, particularly the ranchera style with which he had begun his career. Prior to A Corazón Abierto, the last pop album by Fernández was Entre Tus Brazos (2000), a chart-topping collaboration with producer/songwriters Emilio Estefan, Jr., and Kike Santander, who three years earlier had helmed his mainstream breakthrough, Me Estoy Enamorando (1997), a blockbuster pop-crossover effort that spawned four Billboard chart-topping hit singles. Consequently, the release of A Corazón Abierto was something of an event, a much-hyped return to pop by Fernández that was either long awaited (by those who enjoy his pop efforts) or unwelcomed (by those who would prefer that he remain focused on traditional Mexican music). Regardless of your preference, there's no question that A Corazón Abierto is exceptionally well crafted and graced with numerous first-rate songs. While Estefan is a no-show this time around, Santander plays a major role in the outcome of A Corazón Abierto. Not only does he produce the album alongside Aureo Baqueiro; he also is credited with writing five of the 12 songs. The production of Santander is key to the success of A Corazón Abierto. Glossy and multi-layered, his production work is broadly appealing and well suited to the pop-crossover market, yet at the same time, it remains firmly rooted in ranchera and other regional Mexican styles long associated with Fernández and his father, Vincente Fernández. Another key to the success of A Corazón Abierto is the stable of songwriting talent on hand. In addition to Santander, the album boasts the songwriting of Leonel García (of the Latin pop duo Sin Bandera), Gian Marco, Jaime Flores, and Reyli Barba (aka Reyli), each among the best Latin pop songwriters of his day. The result is a batch of well-crafted songs, particularly the hit singles "Me Dediqué a Perderte," "Canta Corazón," "Qué Voy a Hacer con Mi Amor," and "Qué Lástima." If Fernández sounds less in command of the music, that's simply the nature of a blockbuster pop album such as this, where the producers and songwriters are arguably as key to the success of the album as the vocalist. Relative to his previous pop albums, though, Fernández sounds more at ease on A Corazón Abierto, as if he's truly enjoying himself and singing from the heart. That he sounds more at home makes A Corazón Abierto perhaps his best pop album to date. Granted, it's not a monumental release the way Me Estoy Enamorando was back in 1997, breaking Fernández into the Latin pop mainstream as it did and establishing him as a crossover star in the process. But it's arguably a better album overall, in no small part because it's more respectful of his roots, and was well worth the wait for fans of Fernández the hitmaker. ~ Jason Birchmeier, Rovi