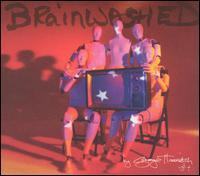 George Harrison went quiet not long after the second Traveling Wilburys album, surfacing only for the Beatles' Anthology in the mid-'90s. He was recording all the while, yet he died before completing the album that would have been the follow-up to 1987's Cloud Nine. His son, Dhani, and his longtime friend/collaborator Jeff Lynne completed the recordings, released late in 2002, nearly a year after George's death, as Brainwashed. Given its baggage it's easy to be suspicious about the merits of Brainwashed prior to hearing it. Posthumous efforts often feel incomplete, Harrison's albums were frequently inconsistent, and Lynne favors ornate, cinematic productions that run contrary to George's desire for this project to be simple and low key -- nothing that would suggest that Brainwashed would be a success. Defying all odds, Brainwashed isn't just a success, it's one of the finest records Harrison ever made. No, it doesn't achieve the splendor of All Things Must Pass, nor is it quite of its time like both Living in the Material World and Cloud Nine were, but it's a quiet, subtle gem, one that strikes close to the heart of Harrison's music. It's intimate, alternately insightful and cheerfully lightweight, balancing his trademark black humor with silliness and good humor. Anyone searching the album for his views on mortality -- as he faced not only cancer, but an attacker that nearly took his life -- will surely find it, but this is not a somber album, it is a warm album, the sound of someone enjoying life without losing his wry sense of humor. This same spirit carries over to the music, with Harrison abandoning the idea of getting a hit and simply relaxing, primarily by playing a lot of ukulele and guitar. There aren't any major songs here and perhaps a tune or two could be pegged as throwaways by the cynical, but there are no down moments and it all holds together well -- better than most Harrison albums -- and it's a fitting way to say goodbye, every bit as good as Double Fantasy and, in some respects, even sweeter. ~ Stephen Thomas Erlewine, Rovi