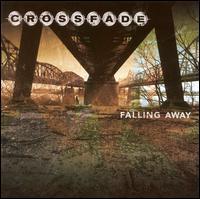 2004's self-titled effort turned Crossfade into platinum-selling artists, driven by the success of their self-deprecating lead single "Cold," which stayed on the rock charts for some ridiculous amount of time, like over a year or so. Since then, the band has been stripped down to a trio after losing DJ Tony Byroads to the realms of marriage, and the occasional sampling and synth appearances have left with him. Crossfade's controlled rock aggression has remained intact, however, and their follow-up, Falling Away, is pretty much more of the same in all other respects -- strained vocals, authoritative guitars, bashing drums, dismal atmosphere. "Washing the World Away" and "Why" have some of the most crunching guitars present, the latter finishing off with a pretty gut-wrenching, embittered shriek. However, said cry is a somewhat abrupt ending to the song, a problem other tracks exhibit as well, yet not enough to completely throw off the record's overall flow. Mopey lyrics and soaring choruses of pain and misery abound; Ed Sloan's hardened voice struts with angry bitterness, like he's spent his entire life in relationships where he's been sufficiently screwing things up or someone has been screwing him over. He laments how much "it hurts to be alone in this cell I call my home/but it heals me in my mind without you by my side" over gentle strumming and percussion before lurching into the dejected "nothing feels good anymore/everything's wrong" power chorus of "Everything's Wrong." But the sensitive-tough-guy love of "Invincible" shows his heart may actually be capable of repair, even if the song falls a bit short musically as compared to the aching strength and melody of a track like "Already Gone." Overall, Falling Away adds up for a competent display of regurgitated post-grunge, albeit one that struggles to even really measure up to the most memorable moments of Nickelback. Then again, the unexpected and out of place, semi-jazzy, closing piano jam of "Never Coming Home" reveals, especially in its emphasis on forceful vocal range exploration, that there could be something more to Crossfade than just wounded frat rock. Um, maybe. ~ Corey Apar, Rovi