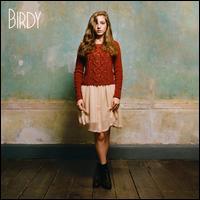 On the face of it, the self-titled debut from 15-year-old Birdy, aka Jasmine van den Bogaerde, doesn't seem any different from the hastily assembled cash-in covers albums released every year by the various X Factor alumni. But although its 11 renditions of mostly contemporary songs, many of which could be passed off as originals due to their previous lack of exposure, stick to the tried-and-tested talent show formula, that's where the comparisons end. Indeed, you won't find any karaoke standards or renditions of Miley Cyrus songs here, as this stripped-back collection of lesser-known hits and album tracks reads like a who's who of lo-fi hipster indie rock. The likes of the National's "Terrible Love" and Francis & the Lights' "I'll Never Forget You" offer little deviation from the source material, but for the most part, producers Rich Costey (Muse), James Ford (Arctic Monkeys), and Jim Abiss (Adele) strip the songs down to their bare bones, turning Cherry Ghost's everyman anthem "People Hold the People" into a tender torch song with its stately piano chords and mournful cello, toning down the aggression of the Naked & Famous' synth pop hit "Young Blood" with some muted beats and ethereal twinkling electronica, while somehow turning the already sparse "Shelter" from the xx's Mercury Music Prize winner into an even more skeletal and ghostly affair. As clever and subtle as these reworkings are, it's Birdy's youthful and fragile voice that steals the show, whether it's replicating the multi-layered harmonies of Fleet Foxes' "White Winter Hymnal," providing a poignancy to Bon Iver's "Skinny Love," or showcasing her scale-gliding abilities on the Postal Service's "The District Sleeps Alone Tonight." The gospel-tinged cover of James Taylor's "Fire and Rain," the only track to sound more expansive than the original, feels slightly out of place, while the unremarkable balladry of the only original composition, "Without a Word," suggests she might have to work a little harder on her songwriting skills if she's to avoid becoming a one-trick pony. The whole idea of Birdy sounds like a transparent attempt to court a more credible audience, but thanks to her haunting tones and a tasteful yet compelling production, it impressively avoids being the try-hard affair you'd expect. ~ Jon O'Brien, Rovi