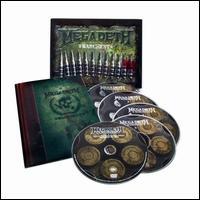 The canonization of Megadeth that began in 2002 with the remixed edition of the band's debut, Killing Is My Business...And Business Is Good! (1985), continued over the years with further deluxe-packaged, remastered reissues of each studio album, and ultimately led to Warchest, a massive five-disc (four CDs, one DVD) box set boasting over six hours of music, including 33 previously unreleased tracks. There's something for everyone -- from longtime fans to neophytes -- in this box, which is similar in both approach and packaging to Slayer's five-disc Soundtrack to the Apocalypse (2003). The first three discs of Warchest are a chronological survey of the Megadeth catalog to date. The first disc covers the time frame spanning Killing Is My Business...And Business Is Good! (1985), Peace Sells...But Who's Buying? (1986), So Far, So Good...So What! (1988), and Rust in Peace (1990); the second covers Countdown to Extinction (1992) and Youthanasia (1994); and the third covers Cryptic Writings (1997), Risk (1999), The World Needs a Hero (2001), and The System Has Failed (2004). Previously unreleased items are interspersed throughout, keeping with the chronological sequencing. The most notable of these are an unabridged session take of "Anarchy in the U.K." (circa So Far, So Good) that segues into "Problems," another Sex Pistols song; a few Rust in Peace demos ("Holy Wars," "Tornado of Souls," "The Five Magics"); and live performances (circa 1992) of several Countdown to Extinction songs. There's also the entire fourth disc, a high-quality live recording of a concert at Wembley Stadium in London on October 16, 1990. The audio is amazing, with stereo separation of the guitars, and toward the end of the concert, former Diamond Head lead vocalist Sean Harris joins the band on-stage to sing "It's Electric." The fifth disc, the DVD, is another live performance, this one at Hammersmith Odeon in London on September 30, 1992. Warchest also comes with an informative booklet laden with photos and discographical notes. If there's a major complaint that could be filed against Warchest, it's that it includes precious little of Megadeth's three key albums: Peace Sells, Rust in Peace, and Countdown to Extinction. But this complaint doesn't carry much weight, because the songs from those albums are indeed here in alternate versions (for instance, the live recordings are primarily of songs from these three albums), and also because any Megadeth fan will want to have those classic albums in full anyhow. ~ Jason Birchmeier, Rovi