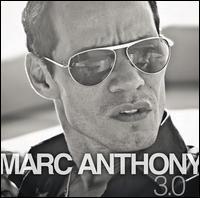 Until 3.0, Marc Anthony hadn't recorded an original salsa album since 2004's Valio la Pena. Co-produced by Anthony with longtime collaborator Sergio George -- also his pianist and bandleader -- most of the set was cut live in the studio with a full band, with overdubs added later. The opener is "Vivir Mi Vida," and the chart-topping single proves a canny yet interesting choice; it isn't a typical salsa number. With its big, anthemic backing chorus introducing it, before the claves and piano and percussion kick in, it's obvious this is a big, "baila baila" number, and not what the singer usually delivers as salsa. Its melodic hook is unmistakable, the interplay between the vocal and horns in the verses with the organic rhythms percolating right up front, and that enormous chorus makes it irresistible. And the salsa groove, once established, never lets go. But this isn't the album's strongest cut by a long shot. It's followed by another feint in "Volver a Comenzar," which commences as a sparse bittersweet ballad but quickly picks up in intensity, keeping the wistful flavor in a tropical groove. The bright soulful "Cambio de Piel," with its lithe piano, bright horns, and soaring, emotive vocal, is another highlight. The set's masterpiece, however, is "Espera," written by Ettore Grenci and Monica Velez. One suspects that the entire album was built around this glorious song. Commencing as a minor-key ballad, this sensual brooder is introduced by pronounced moody piano chords and bubbling congas before it opens wide about a minute in and George's piano begins with a series of percussive, swinging montunos leading wide-ranging, punchy horns -- the trombones act almost as a second bassline -- allowing Anthony to cut loose, pushing the rhythmic components of the melody in his improvisational phrasing to draw maximum emotion from its lyric. The string-laden ballad "La Copa Rota," featuring Rene Luis Toledo's gorgeous nylon-string guitar solo gliding atop the horns, moves toward son near the end, and the guitarist throws a curve by closing it with a tight 12-string solo. Aside from the compression in its horn production, "Hipocresía," by Julio Reyes (who contributes several tunes here), would have been right at home on an album by Cheo Feliciano or Ismael Rivera with Anthony's soaring improvisation in the break. The only complaint is the inclusion of the pop version of "Vivir Mi Vida" as a closer. It's totally unnecessary and changes the flavor of the album after the wrenching ballad-turned-burner "Cautivo de Este Amor," which would have been the perfect ending. That said, it's a small nick on 3.0, which is otherwise a solid, passionate -- and long overdue -- return by the great salsero to the roots music that established his career. ~ Thom Jurek, Rovi