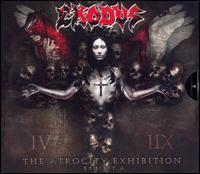 With the untimely passing of founding vocalist Paul Baloff in 2002, and the subsequent, short-lived reunion with his original successor, Steve Zetro Souza, for 2004's acclaimed comeback LP, Tempo of the Damned, Bay Area thrash metal kings Exodus were forced to audition a new frontman for the first time in 20 years before moving on with their resuscitated career. Rob Dukes, a relative unknown, was duly hired and thrown almost immediately to the mosh pit wolves via 2006's Shovel Headed Kill Machine -- acquitting himself rather well thanks to his vocal and temperamental similarities to his predecessors, as well as the reliable ultra-thrash high standards of that album's songwriting, overseen as ever by Exodus' longstanding creative leader, guitarist Gary Holt. But, when the time came for the rookie singer's sophomore outing as Exodus' mouth-of-war, 2007's tellingly titled The Atrocity Exhibition (the group's eighth studio album overall), Dukes was handed a far more challenging homework assignment by taskmaster Holt involving by some of the deepest and most thought-provoking lyrics of the band's career, not to mention their most musically ambitious and eclectic collection of songs since 1992's underrated Force of Habit. Yet, rather than following that album's fatal mistake of discarding some of the band's most defining bludgeoning thrash sounds, Atrocity endeavored to tie the album's songs together with a loosely conceptual theme centered around religiously motivated strife and warfare, as well as slower tempos, while taking advantage of Dukes' ability to sing melodically and incorporate additional flavors amid those signature thrash attributes. Taken as whole, the end results may well qualify as Exodus' personal Master of Puppets (possibly inspired by Machine Head's similarly emboldened The Blackening CD, released just a few months prior), as familiarly single-minded speed thrashers like "Riot Act" and "Bedlam 1-2-3" simply bookend a slew of multi-faceted epics of unprecedented instrumental and dynamic diversity like "Funeral Hymn," "Iconoclasm," and the ten-minute title track itself. Sure, first generation fans may still view Dukes' alternating clean and dirty vocals on "Children of a Worthless God" as no small travesty, but the fact is the strategy works in the context of the song's emotionally charged message, and -- let's face it -- makes for another welcome talking point. Finally, the return of founding drummer Tom Hunting may help old-school fans cope with these experiments, since, like Dave Lombardo for Slayer or Phil Rudd for AC/DC, Exodus never sound quite right without him and his personal combination of sheer chops, untold power, and all-important "feel." And, like it or not, into every long-term career, change and risk-taking must come sometimes, and, given a few more years (not least for Dukes to further establish himself), one feels that The Atrocity Exhibition will stand up as one of Exodus' deepest, and most intriguing albums. ~ Eduardo Rivadavia, Rovi