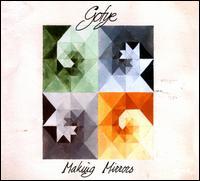 Stepping out from behind the piano/drums of Melbourne indie pop three-piece the Basics for the third time, Belgian-Australian multi-instrumentalist Wally De Backer, aka Gotye's first solo record in five years, Making Mirrors, reveals a love of the '80s pop scene, which extends far beyond the usual influences of the current nu-synth brigade. The hugely experimental follow-up to 2006's Like Drawing Blood doesn't discriminate against other decades, as evident on the impossibly uplifting '60s retro soul of "I Feel Better," the '70s West Coast harmonies of the ethereal lullaby-like closer "Bronte," the '90s Beck-esque scuzzy garage rock of "Easy Way Out," and the 2000s hushed, claustrophobic dubstep of "Don't Worry, We'll Be Watching You." But seemingly unaffected by the constant comparisons with the likes of Sting and Peter Gabriel, it's the era of early new wave, dub, and worldbeat which defines its 12 tracks. Unexpected chart-topper "Somebody That I Used to Know," a collaboration with New Zealand vocalist Kimbra, is an oddball break-up song whose stuttering rhythms, reggae hooks, and hushed vocals sound like the Police as remixed by the XX, "Smoke and Mirrors" echoes the avant-garde pop of Gabriel's So, with its pounding tribal drums, orchestral flourishes, and new age melodies, while there are also nods to George Michael's "Faith" on the acoustic gospel-pop of "In Your Light"; the impassioned Aussie rock of Midnight Oil on the ecologically themed "Eyes Wide Open," and electro pioneer Thomas Dolby on the strange, vocodered vocals, spoken word samples, and skank guitars of the trippy "State of the Art." Familiar they may be, but some credit has to go to De Backer for managing to weave these eclectic retro sounds into a cohesive affair, which proves that along with recent efforts by Art vs. Science and Architecture in Helsinki, Australia is fast becoming one of the biggest purveyors of quality experimental pop. ~ Jon O'Brien, Rovi